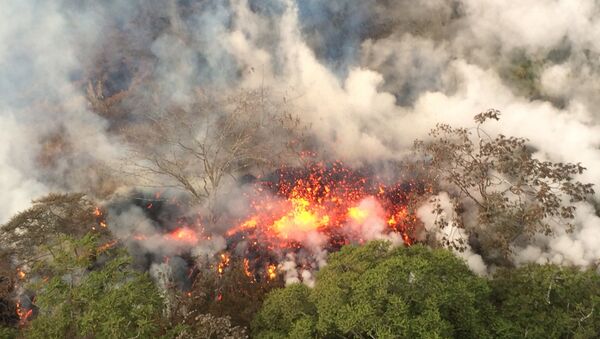 At least 22 people sustained injuries following a lava explosion in Hawaii that sent rocks flying through the air at a tour boat near the coast of the Big Island, with at least one severely hurt.

According to fire officials on the Big Island, a "lava bomb" pierced the roof of a small tour boat and made a large hole in it. The initial injury count was 13; that number was later raised to 22, according to a fire official, who said four people were transported to a local hospital by ambulance.

#BREAKING: As many as 12 people hurt after a lava explosion sent rocks & debris through the roof of a tour boat off Kapoho More info & pics: https://t.co/maIhFVb4mC #Hawaii #KilaueaVolcano #Lava #lavaexplosion
(photo: DLNR) pic.twitter.com/YCHaetSi2l

​About 52 people were aboard the boat when the incident happened: 49 tourists and three crew members, Hawaii News Now reports.

Since May 3, the Kilauea volcano has erupted on a semi-regular basis. The volcano is considered one of the most active of the volcanoes that created the five main Hawaiian islands.

​The Monday incident is related to the the ongoing volcanic event, dubbed the 2018 lower Puna eruption. Lava has shot up 300 feet in the air at certain points during the ongoing eruption.

​About 600 houses have been covered by the lava since the lower Puna eruption started, according to Mayor of Hawaii County (Hawaii's Big Island) Harry Kim.