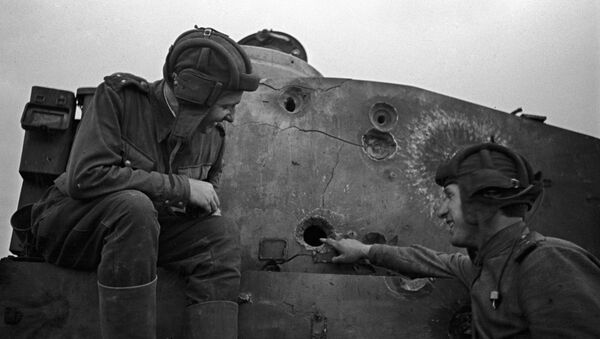 Thursday marks the 75th anniversary of the Battle of Prokhorovka. The battle, which commenced a Soviet counteroffensive in the wider Battle of Kursk, was a key episode in that titanic clash, and one of the decisive battles of the Second World War. Sputnik presents the battle's key facts, figures, and dates.

In the summer of 1943, the German High Command made the fateful decision to attempt to eliminate the Kursk salient, a bulge in the front line formed following the Soviet winter offensive following Stalingrad. Significant Soviet forces became concentrated around the town of Kursk, about 450 km southwest of Moscow, and wedged about 150 km westward into the German side of the surrounding front line.

Code-named "Operation Citadel," the Nazi offensive intended to surround and eliminate Soviet formations after a swift pincer blow coming from the north and south of Kursk, and to give the Wehrmacht a strategic advantage on the Eastern Front. 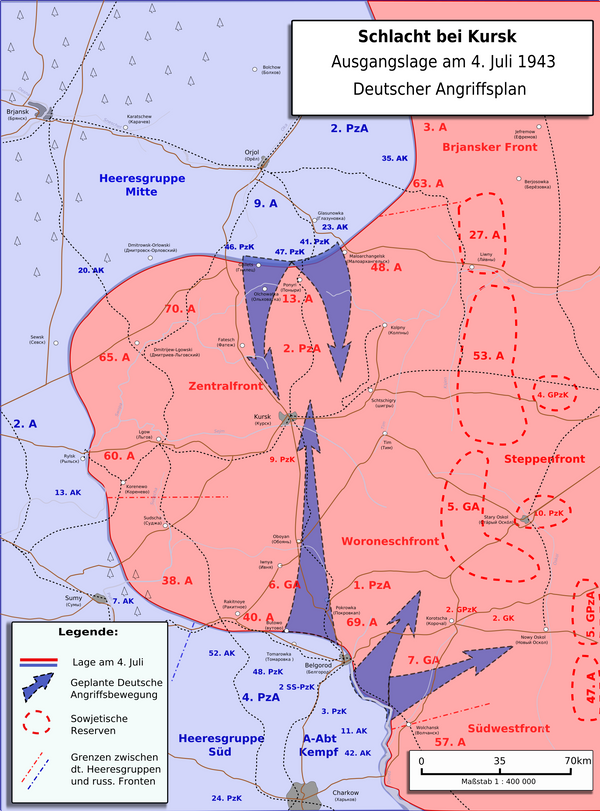 For this purpose, the Wehrmacht concentrated 50 divisions, or over 900,000 troops, close to 3,000 tanks and self-propelled artillery pieces, and 10,000 heavy guns and mortars. Two thousand aircraft were diverted for the operation. The offensive would also become a proving ground for new German weapons, including the Panther and Tiger medium and heavy tanks, as well as the Fw 190A fighter.

The UK's Nazi code-breaking program at Bletchley Park revealed preparations for a major German offensive at Kursk in early summer, but London failed to share this information with its Soviet allies. This prompted civil servant and Soviet agent John Cairncross, then working at Bletchley Park, to pass the invaluable information on to Soviet military intelligence.

Armed with this information, the Soviet High Command decided to set a trap for the Wehrmacht at Kursk to sap the strength out of its offensive capabilities. Troops from the Central, Voronezh and Stepnoy Fronts commanded by Generals Konstantin Rokossovsky, Nikolai Vatutin and Ivan Konev were concentrated to oppose the German buildup. The Soviets managed to amass nearly 2 million troops, over 26,500 guns and mortars, and 5,000 tanks self-propelled artillery units. 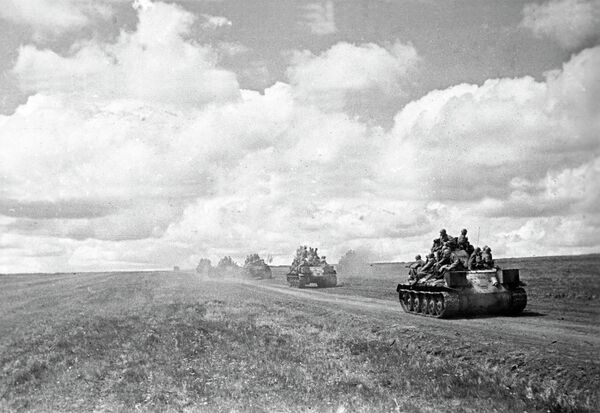 The Wehrmacht launched Operation Citadel on July 5, with Rokossovsky's forces taking on the Wehrmacht strike group north of the Kursk salient. In the south, Vatutin's forces fought to slow Army Group South's lightning offensive to a crawl. Suffering the loss of 300 tanks on the first day, the German command continued its search for weaknesses in the Soviet front line, and by July 9 managed to successfully wedge itself into the salient to a depth of 35 km.

The battle-hardened tank corps of the 4th Panzer Army and the 3rd tank corps of the Kemf detachment were concentrated in the direction of the town of Prokhorovka, southeast of Kursk. These units included the elite First SS Panzer Division Leibstandarte Adolf Hitler, Das Reich and Dead Head tank units. 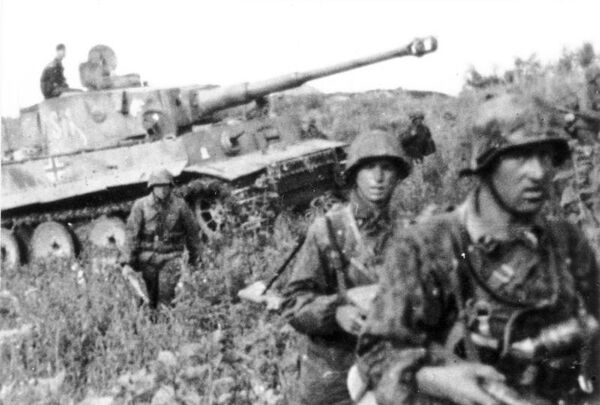 Armed with Panthers and Tigers, the Wehrmacht forces' tactics included deploying separate artillery detachments throughout the entire zone of defense. The new tanks were concentrated at the front of the spearheads to punch through defenses, and followed up by Panzer IV medium tanks. The tanks' communications equipment allowed for radio contact between forces and interaction with aviation.

On the Soviet side was the 183rd Infantry Division and the 2nd Tank Corps, each of which had suffered heavy losses to Luftwaffe air attacks along the entire front during the German offensive.

To break the Nazi advance south of Kursk, the Soviet High Command planned an armored counterattack, assigning the mission to the Fifth Guards Tank Army commanded by Lieutenant General Pavel Rotmistrov. Several other tank units and artillery and mortar regiments, weakened by earlier engagements, were subordinated to the commander.

In total, the Soviets amassed about 700 tanks and self-propelled artillery pieces against nearly 500 German tanks and assault guns in a territory of only a few dozen square km. 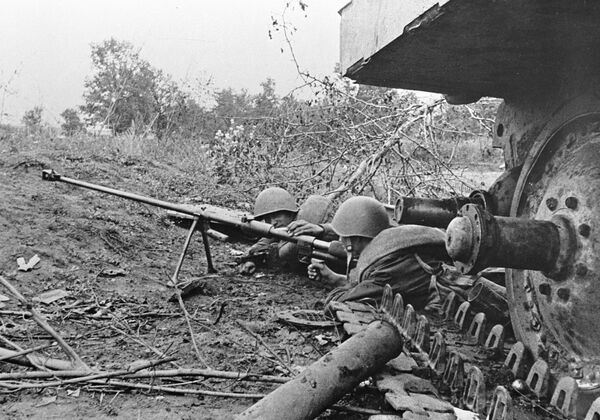 Soviet Guardsmen armed with an anti-tank rifle repel a Nazi tank attack during the Battle of Kursk. 1943
© Sputnik / Ryumkin
/
Go to the photo bank

On the morning of July 12, the Red Army began an artillery barrage to try to soften up enemy forces. The First SS Panzer Division rushed to defensive positions. Soviet tank men, equipped mostly with older T-34 tanks with 76mm guns, proved outmatched against the new Tigers. This disparity became especially painful as tanks rushed into close-quarters combat, with the Tigers' 88 mm shells easily penetrating the T-34s' armor. All that was left for the Soviets was to rely on their tanks' superior speed and maneuverability. Enemy artillery and bombardment by hundreds of enemy aircraft quickly turned the offensive into a meat grinder.

By the end of the day on July 12, the area surrounding Prokhorovka was littered with burning tanks, scorched earth, and thousands of fallen soldiers. The sky above was filled with smoke, dust and soot.

The Germans managed to hold their positions, but were exhausted in the process. Rotmistrov's tank forces, including the 29th and 18th Tank Corps, lost some 60 percent and 30 percent of their armor, respectively. Between 170-180 Soviet tanks were destroyed, and nearly 6,000 troops were killed. Eighty German tanks and assault guns were lost, 800 troops were killed, and 11 aircraft were destroyed or severely damaged. 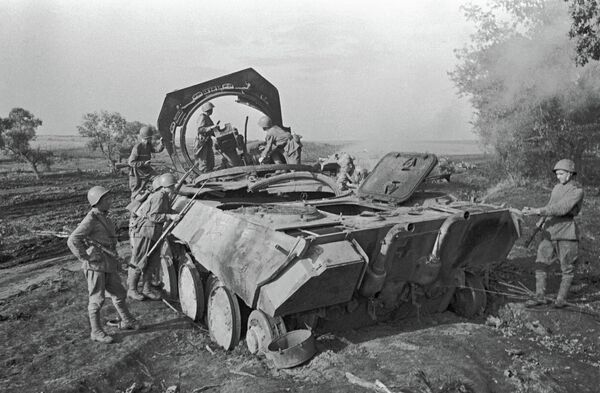 Fighting in the area continued until July 16, with each side failing to break through the other's defenses. However, the Germans exhausted their offensive potential, and Army Group South abandoned its plans to break through to Kursk.

The Soviet counteroffensive at Kursk, which had begun on July 12, lasted until August 23, pushing the strategic initiative to the Soviet side. In total, the Soviets lost some 254,470 men, with the Wehrmacht suffering 130,429 casualties. In 50 days of fighting, the Wehrmacht lost about 1,500 tanks and assault guns and destroyed an estimated 6,000 Soviet tanks and guns. Nearly 1,700 Luftwaffe planes and over 1,600 Red Air Force planes were also lost. For the remainder of the war, the Nazis never again regained the strategic initiative on the Eastern Front. 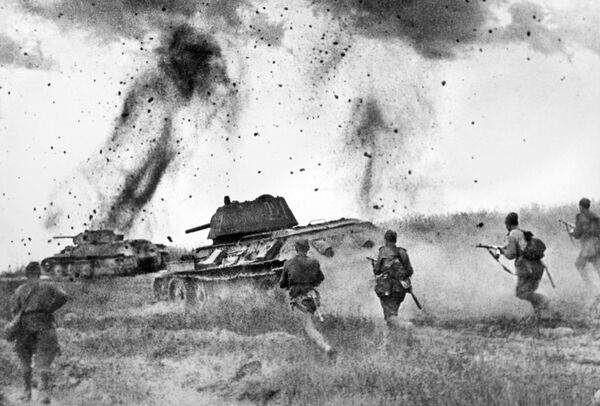