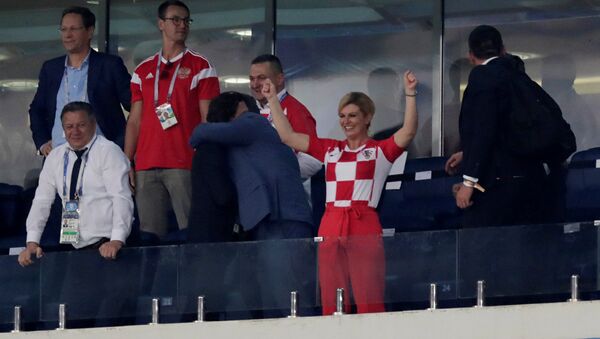 While France and Croatia prepare for the final showdown of the FIFA World Cup in Moscow, perhaps the most high-ranking fan of the Croatian team is ready to travel to the Russian capital to cheer them on.

With the final match of the 2018 FIFA World Cup scheduled to take place this Sunday in Moscow, Croatian President Kolinda Grabar-Kitarovic, who already stole the spotlight during the championship, is expected to support her team in person.

The Croatian leader already visited Russia during the ongoing football championship, supporting her team during the Croatia-Denmark match and later celebrating their quarterfinals victory over Russia.

She also cheered for the team as it managed to prevail over England in the semifinals and now stands ready to take on France in the finals.

The president’s beauty and vigor also caught the eye of many social media users keeping tabs on the World Cup.

Who would want to disappoint their president? There is no way Croatia would go there to let Her Excellency President Kolinda Grabar-Kitarović down #CROvENG pic.twitter.com/EbHDl7oiBP

I am a supporter of Croatia because i want to see more of there president KOLINDA GRABAR-KITAROVIC #RUSCRO 😂 pic.twitter.com/dfvj909nU0