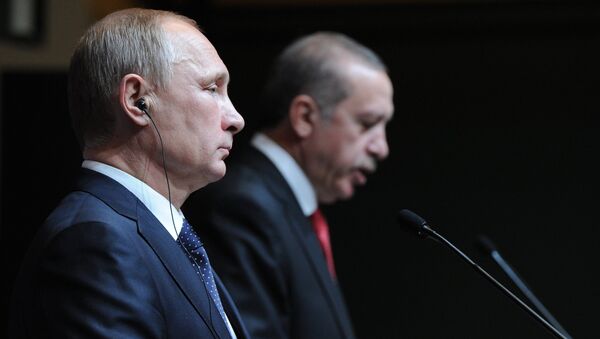 The comment comes ahead of the upcoming NATO summit in Brussels that is set to take place on 11-12 July, where the US is expected to demand other member-states to increase their military spending to 2% of GDP, in accordance with the alliance’s requirements.

US NATO Ambassador Kay Bailey Hutchison shared his opinion that Russia is attempting to "flip" Turkey and a number of other NATO members in an interview with Fox News.

"I do think Russia is trying to flip Turkey. They are trying to flip many of our allies. They want to destabilize the strongest defense alliance in the history of the world — NATO," she said.

At the same time, she expressed confidence that Turkey will remain a US ally as a "NATO strong member."

Hutchinson's comment comes just days ahead of the NATO summit that is set to take place in Brussels on 11-12 July. President Trump is expected during the summit to demand that other allies contribute more to NATO by raising their defense spending up to 2% of GDP. Trump has raised repeatedly this demand during his rallies, condemning the fact that it is the US that is bearing the bulk of NATO expenditures.

Relations between Washington and Ankara worsened after Turkey decided to buy S-400 air defense systems from Moscow. In mid-April, US Assistant Secretary of State for European and Eurasian Affairs Wess Mitchell said that Ankara's purchase of the S-400 could negatively affect the delivery of fifth-generation F-35 fighter jets to Turkey.

Turkish Foreign Minister Mevlut Cavusoglu has promised retaliatory measures against Washington if it blocks the delivery of the jets. He also pointed out that Turkey would consider purchasing US-made Patriot missile batteries or any other air defense systems if it is given a fair offer from its NATO allies.