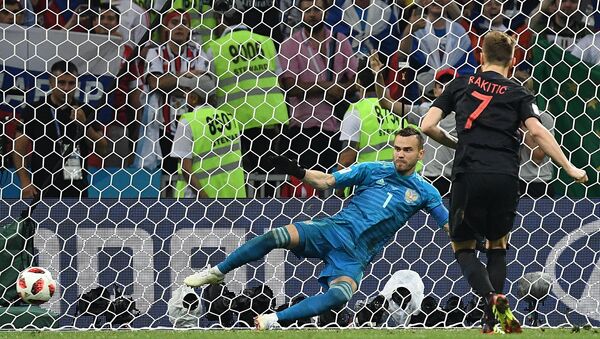 © Sputnik / Alexander Wilf
/
Go to the photo bank
Subscribe
FIFA World Cup quarterfinals thriller standoff between Russia and Croatia went to penalty shootout on Saturday after the squads were tied at 2-2 at the end of the extra time.

The dramatic FIFA World Cup quarterfinals match against Russia and Croatia was hosted by the southern city of Sochi at the Fisht Stadium. The game started with a tough struggle between the two teams: however, Russia midfielder Denis Cheryshev scored the opener in the 31st minute with a stunning left-footed strike from distance, to notch up his fourth goal of the tournament. 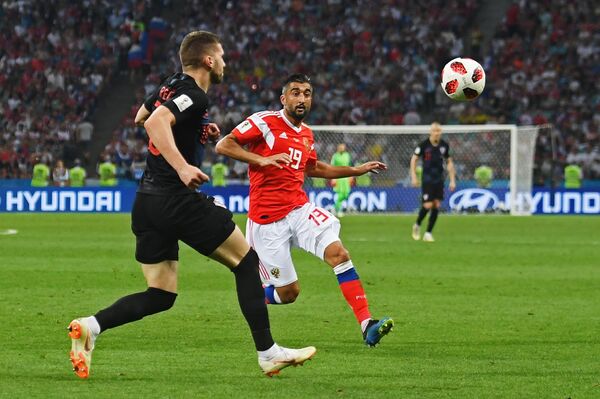 Croatia equalized through forward Andrej Kramaric a few minutes before the break, as Russia were guilty of poor defending, leaving the Hoffenheim forward unmarked to steer the ball past goalkeeper Igor Akinfeev. 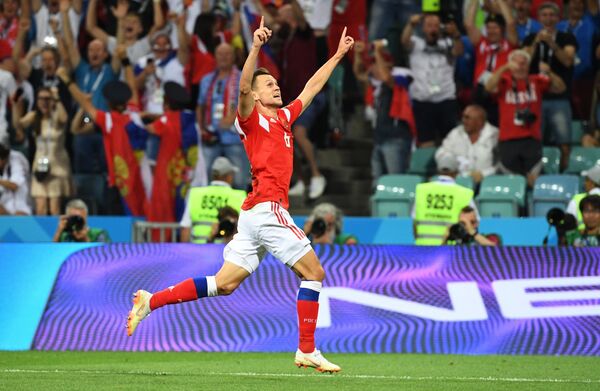 Russia's midfielder Denis Cheryshev triumphs after he scored a goal in the match against Croatia.
© Sputnik / Alexander Wilf
/
Go to the photo bank

The game finished 1-1 after the 90 minutes, which sent the match into extra time. Croatia defender Domagoj Vida gave his side the lead in the 101st minute, with a header directed towards the bottom corner, which eluded Akinfeev.

Russia defender Mario Fernandes netted a goal in 115th minute with a fund header from Alan Dzagoev’s free kick, which sent the match into penalties. 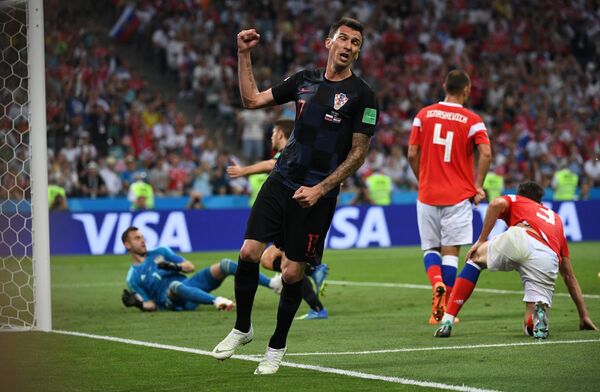 Feder Smolov and Fernandes both missed from the spot, and Croatia’s Ivan Rakitic converted the winning penalty to send Croatia into the last four.

Croatia midfielder Luka Modric was named the man of the match. Modric spent the whole 120 minutes on the pitch, assisted with one goal and scored a spot kick during the penalty shootout.

Croatia will take on England, which beat Sweden 2-0 and qualified for the semi-finals for the first time in 28 years, on July 11. Croatian President Kolinda Grabar-Kitarovic and Russian Prime Minister Dmitry Medvedev were reportedly attending the match. 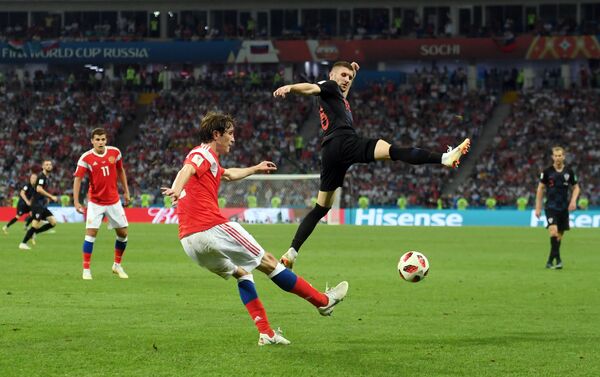 FIFA World Cup 2018 Quarterfinals, Russia - Croatia
© Sputnik / Yevgeniya Novozhenina
/
Go to the photo bank
The FIFA World Cup quarterfinals match between Russia and Croatia, which took place at the Fisht Stadium in Sochi, was played out in front of a sell-out crowd of 44,287 fans, FIFA announced on their official website. It was the last World Cup match at the 44,287-seater Fisht Stadium, which also hosted four group stage matches and a round of 16 game. 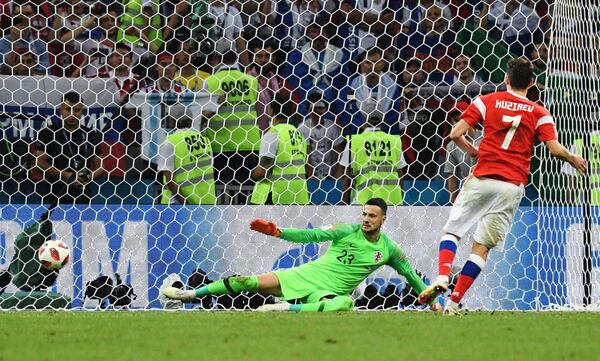 In the round of 16, both Russia and Croatia defeated their rivals — Spain and Denmark — in penalty shootouts, with the host nation's team making a historic advance to the quarterfinals for the first time since 1986.

All of the World Cup semifinal match-ups have been decided on Saturday, after Croatia beat Russia 4-3 on penalties in Sochi. On Tuesday, France will take on Belgium in St. Petersburg. On Wednesday, Croatia will face England at Moscow’s Luzhniki Stadium. 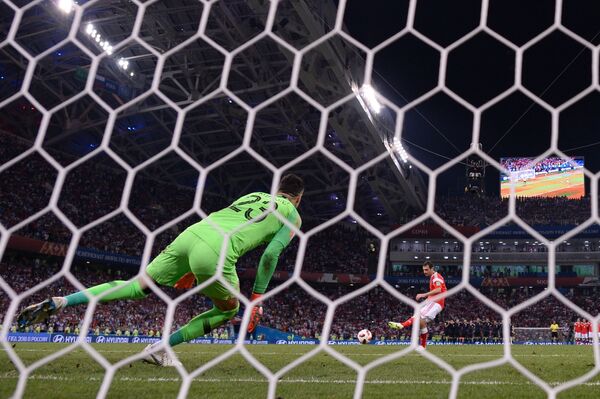 The two finalists will meet at the Luzhniki Stadium on July 15 to fight for the World Champions title, with the other two teams set to meet in the third place play-off in St. Petersburg on July 14. 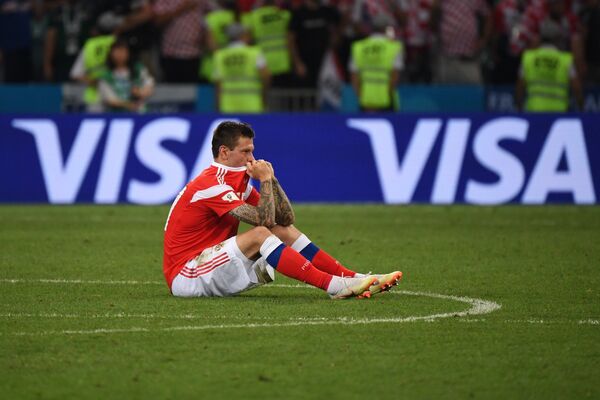 FIFA Secretary General Fatma Samoura said on Saturday night that Russia should be "proud" of their performance despite losing to Croatia in the World Cup quarter-finals.

"Russia, despite your loss tonight in Sochi you should be proud of your performance," Samoura posted on her official Twitter account.

Russia's players are leaving the World Cup "with tears in their eyes but with their heads high," the team said Saturday after the hard fought game.

"Friends! We leave the tournament with tears in our eyes, but with our head held high. Thank you for those sincere, genuine emotions that you gave us throughout the World Cup. Thank you for believing in us. Thank you for everything! You are the best fans in the world!" the team posted on their official Twitter account. 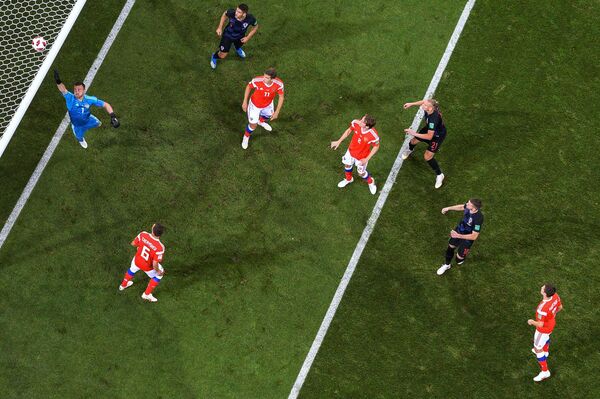 Russia's performance at this summer's home tournament became the most successful in the team's history, following the break-up of the Soviet Union. 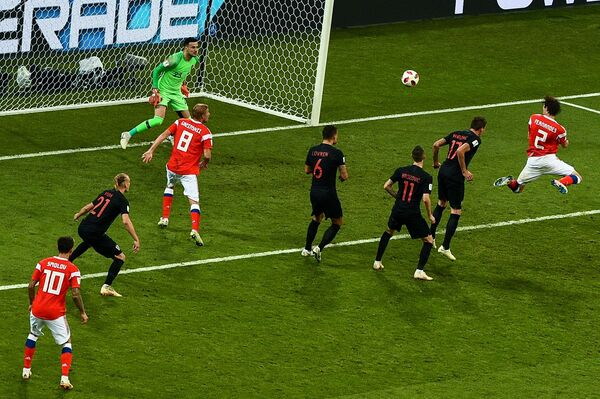 Former Croatia Captain Reminds Russia of its 'Debt' Ahead of Quarterfinals Match
Russia head coach Stanislav Cherchesov said on Saturday that his team felt like “soldiers who demobilized from the army” after their defeat to Croatia, which led to their elimination from the World Cup on Saturday.

“I can’t say we jumped over our heads. We were preparing for the tournament, analyzed details, and the Confederations Cup helped us with that. You saw for yourselves the work the team had done, which showed in our results. We feel like soldiers, who were called up to the army. Today we demobilized. But we wish we could serve and fight. We are disappointed by this 'dembel.' We could serve our motherland till July 15,” Cherchesov told journalists. 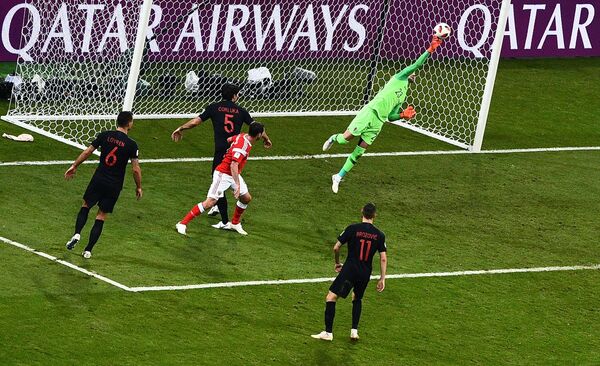 Honorary President of the Russian Olympic Committee Alexander Zhukov told Sputnik on Saturday that Russia's quarterfinals standoff against Croatia was the team's best game at the tournament.

"Our guys were great, they played well, but a penalty shootout is a lottery, we can do nothing about this. The one team won, the other lost, it's football… Russia left the World Cup unbeaten, that says a lot. Today our team had their best game as of recently," Zhukov said.

The Honorary President added that Russia had chances to win. "Russia have an absolutely efficient team, they proved it throughout the whole tournament. They gave all their strength to battle through. [Head coach] Stanislav Cherchesov proved himself, the players deserve praise," he said. 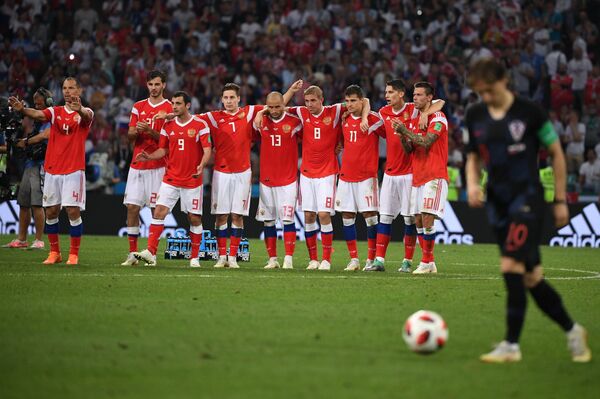 FIFA World Cup 2018 Quarterfinals, Russia - Croatia
© Sputnik / Alexey Fillipov
/
Go to the photo bank
000000
Popular comments
BOOM
Milos2
7 July 2018, 21:37 GMT
000000
Big congrats to both teams. That was a such a great match, kudos to the free kick of Russia at 115'. Too bad about Russia's 3rd shot but Akinfeev & Subašić both did a more than decent match, can't blame Russia for the loss. Cherchesov's rally ftw hehe :D