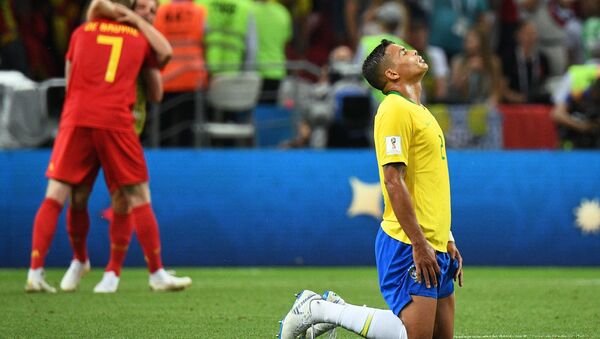 © Sputnik / Владимир Астапкович
/
Go to the photo bank
Subscribe
Five-time champions Brazil lost 2-1 to Belgium in Kazan on Friday and were eliminated from the tournament, while Belgium qualified for the semi-finals, where they will face France in St. Petersburg on Tuesday.

“It was a very impressive game between two teams with fantastic technical qualities. For all the pain I feel right now, if you like football, you have to watch this game. It's going to give you pleasure. If you're a neutral, you can sit back and say 'What a match!' Anyone who appreciate’s football can see that this was a beautiful game,” Tite told reporters at the post-match press conference 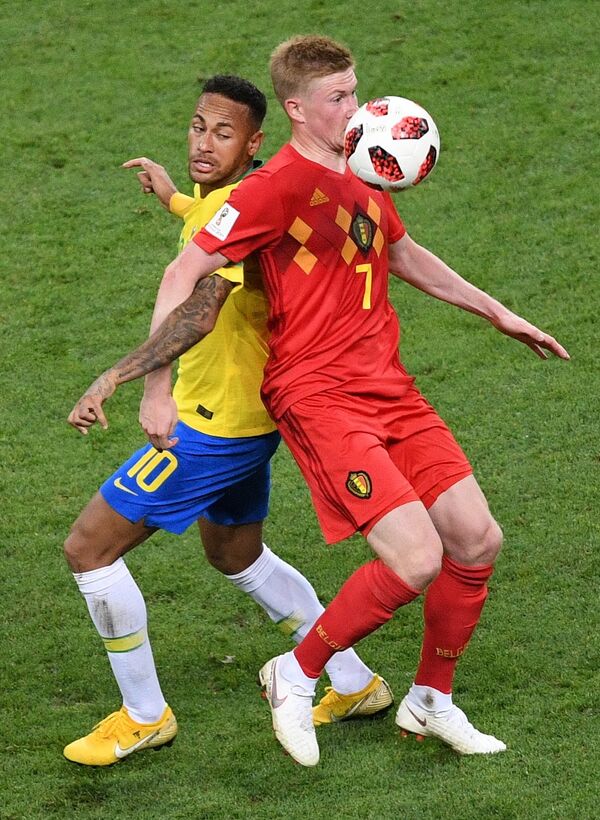 Brazil head coach Tite said on Friday night that his side's striker Neymar had almost reached his "top level" at the 2018 FIFA World Cup in Russia.

"Neymar has almost reached his top level. He started playing much better that I could have imagined, he's a very talented player physically as well. He has outstanding technical and individual qualities. No one can come close to him at this tournament in terms of intensity," Tite told journalists. 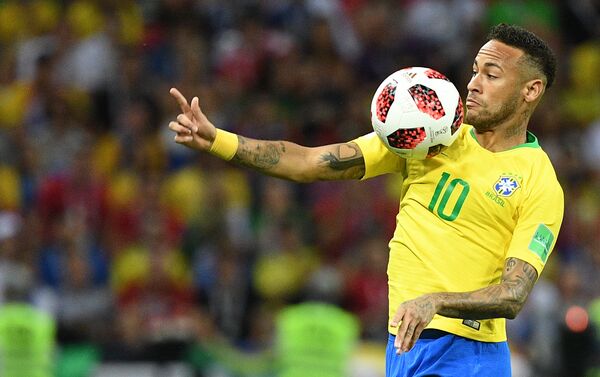 Belgium Beats Five-Time Champs Brazil 2-1, Heads to FIFA World Cup Semi-Finals
However, Belgium also played "incredibly" well in their World Cup quarter-final against Brazil on Friday, and there was no luck involved in their victory, Tite stressed.

"I don’t want to talk about luck in this match. It’s a respectful way to downplay someone’s opportunities, and I don’t want to talk like that about Belgium. They played incredibly. There is no luck here, they acted effectively and could finish their attack… I did not underestimate them, I knew from the beginning that they are a very strong team, but it is very difficult for us to accept this defeat today,” Tite told reporters at the post-match press conference. 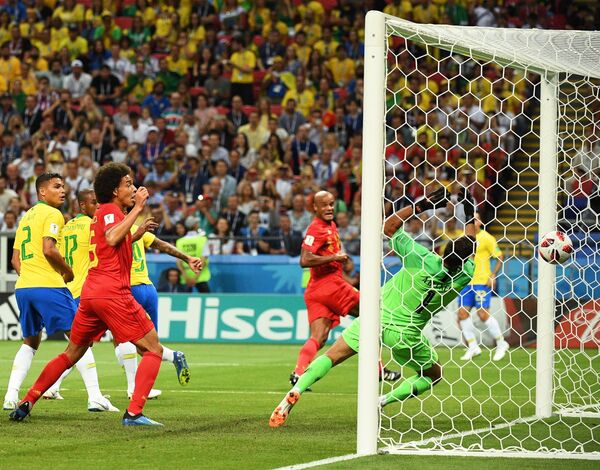 Meanhwhile, Brazil midfielder Willian apologized to his team's fans on Friday night for their performance at the World Cup quarter-finals  against Belgium.

"We are very upset. It's hard for us to put up with this loss as we were dreaming about entering the finals at least. I'm apologizing to all the Brazilian fans who expected us to win," Willian told journalists.

In addition, Brazil forward Roberto Firmino said on Friday night that elimination from the World Cup after a 2-1 quarter-final defeat by Belgium in Kazan was a "huge blow" for his team. 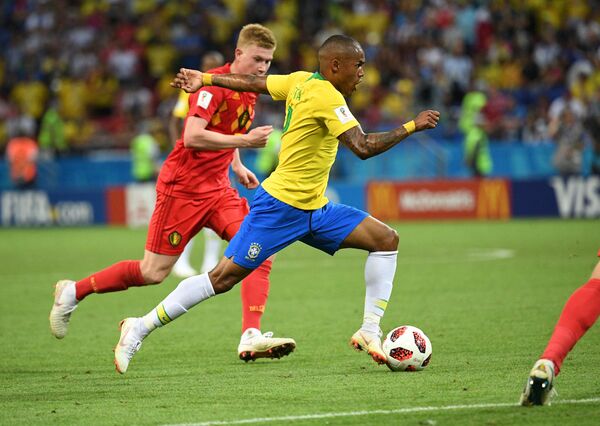 "This is a huge blow for us. It is still difficult for us to understand what happened and where we made a mistake. I do not have an answer for these questions yet. Maybe, I will [have it] tomorrow or later," Firmino said

"We like to have the ball, we like to break teams down and build up. When you've got a team like Brazil, this is going to be a fight for the ball. Today we needed to have a tactical advantage. I don't think you can go on beat Brazil in a World Cup hoping that your talent or your way of playing is going to impose," Martinez told journalists. 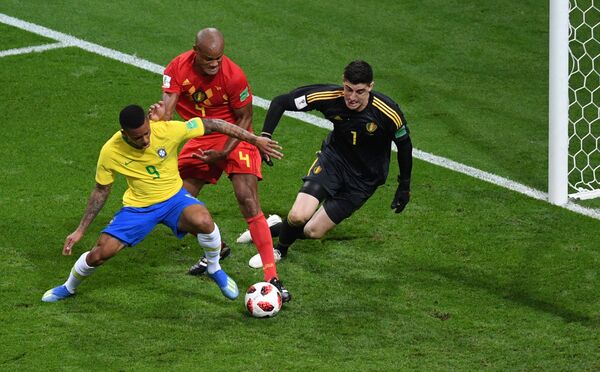 Meanwhile, Belgium forward Romelu Lukaku said on Friday night that he was "truly happy" as long as his team were "doing great."

"There are always many ups and downs. I work a lot and I'm fully focused on the things that I'm doing now. I know that as long as I continue working hard, things will get rolling. Now everything's fine not only for me, but for the whole team. As long as my team are doing great, I'm truly happy," Lukaku told journalists.

In turn, Belgium midfielder Nacer Chadli said on Friday night that beating Brazil in the World Cup quarter-final was a "miracle." 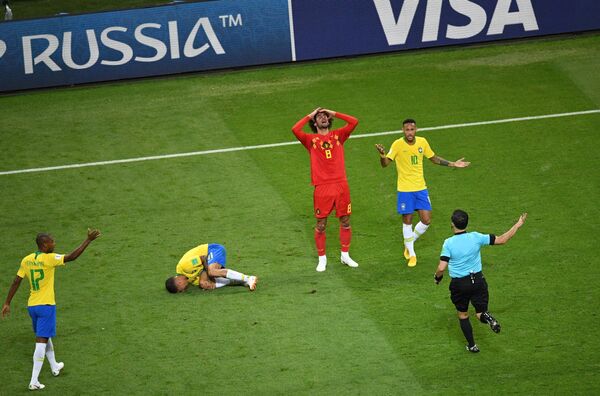 "I'm filled with joy and pride for my team. A miracle happened today. It finally happened! The whole team are so happy about this victory, dreams do come true. It's a result of our joint effort and work, and it's pleasant that it all lead us to success," Chadli told journalists.

‘Keep Rolling’: Twitter Reacts to Brazil-Belgium World Cup Match
Man of the match, Belgium midfielder Kevin De Bruyne said on Saturday that his side's 2-1 win over Brazil in their World Cup quarter-final match was a "victory of character."

"I think we've changed the tactics a little bit. We took the risk and left [Belgium striker Romelu] Lukaku well ahead, as we hoped that he would create scoring opportunities. We were playing very well in the first half of the match, we created many moments, but we changed our tactics… in the second half, which Brazil benefited from. When we came to the 2-1 scoring, we tried to do our best in order not to concede a goal and to push it through to victory. This was a victory of character," De Bruyne told journalists. 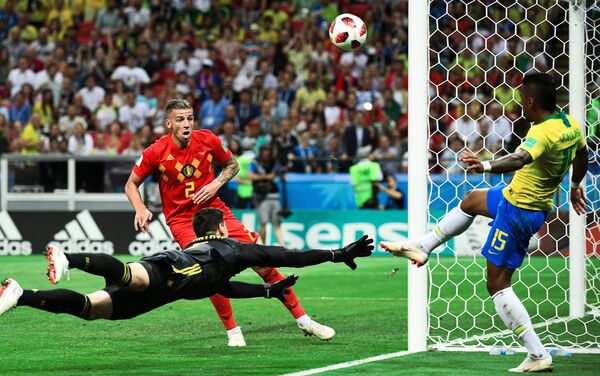 In addition, The 2018 World Cup is playing out "perfectly" for Belgium, midfielder Youri Tielemans said after his team's victory over Brazil on Friday.

“So far the tournament is unfolding in a way perfect for us, we managed to win all our games! It’s a huge victory for our country. We concentrated on Brazil and managed to win. France? We can defeat them, but the game will be very difficult. But it can’t be any other way in a World Cup semi-final,” Tielemans told reporters after the game.

However, Belgium defender Thomas Meunier said Friday night that he was "a little bit upset" that his side would have to face France in the World Cup semi-final match, as he had friends in their team. 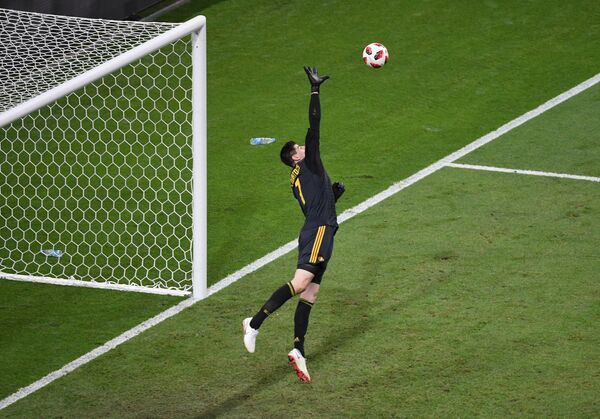 "Frankly speaking, I'm a little bit upset that we'll have to face my teammates and friends. On the other hand, the match will be pure delight," Meunier told journalists. He added that Brazil win was an "exceptional" game for his side.

"We felt huge support from the stands… We acted as one, enjoyed the game and had a well-deserved victory. This is an exceptional day for us," Meunier said. 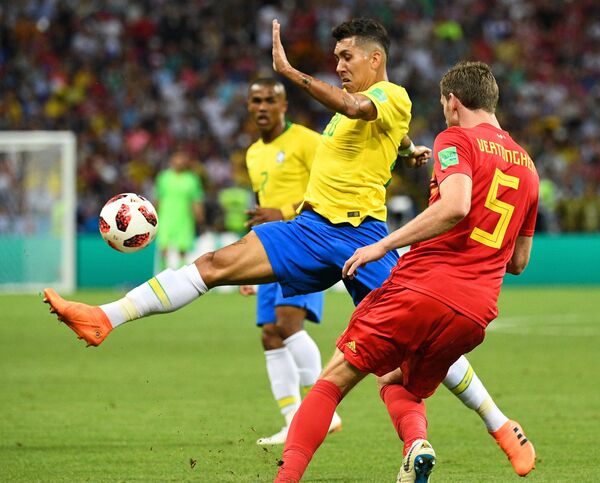