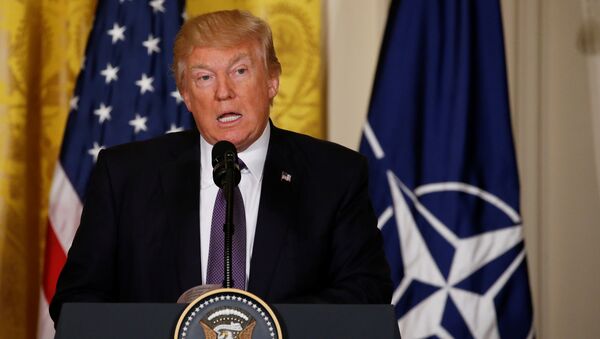 It was revealed this week that President Trump will tell NATO allies at an upcoming summit that the US cannot be “the world’s piggy bank.”

In light of that development, Sputnik spoke to geopolitical analyst and author Nikola Mirkovic, to find out how Europe might respond to such straight talk.

Sputnik: So, we know now that President Trump plans on telling NATO countries next week that the US “cannot be the world’s piggy bank” – how do you expect NATO leaders to respond to that sentiment?

Nikola Mirkovic: I think that most of them would be hypocrites to say that this is something new.

Please bear in mind that former secretary of defence of Barack Obama and George W. Bush, Robert Gates, constantly kept asking NATO countries to respect the two percent engagement of GDP for the NATO budget. So, this is not something new.

Not Just About 'Cash:' Germany Fires Back After Trump Slams NATO 'Underspending'
I think now that a lot of NATO countries will act hypocritical because they don’t know in which direction Donald Trump is going. So, they’re afraid that this menace, of not meeting the two percent engagement of each NATO country, could be hiding something different which could be more in line with what Donald Trump said in his campaign promises, and that NATO was obsolete, that NATO had to be reviewed, even if he came back off that after this is something that is definitely something that could be scary for NATO countries today and this is why they are reacting this way now.

Sputnik: It is of course, certainly the ‘liberal consensus’, that president Trump is essentially tearing apart multilateral institutionalism, but of course man would argue that Trump has a point here, and that NATO members, and Europe more generally, need to start taking care of their own security and defence, a little more independently of the US – what do you think of that?

And if we look at what NATO has been used for, these past years: illegally bombing Serbia, intervening illegally in Afghanistan or bombing Libya, in all three of these regions the situation today is actually worse than it was before, it’s catastrophic.

'Continued Underspending': Trump Slams NATO Over Inadequate Defense Expenditures
So we can ask ourselves, what is the purpose of NATO? When NATO intervenes, the results are opposite to what they were supposed to be. It’s costing a lot of money and do we still need such an organisation?Do European countries still need such an organisation, which is manifestly directed, or driven, by Washington DC. Is this in the interests of the European countries?

If Donald Trump asks if NATO is in our interests, I think the European countries should jump on that bandwagon and review their own strategy in terms of defence.

Sputnik: Do you think that, given the recent concerns in Brussels over the future of the transatlantic alliance, it’s possible that EU leaders may be more open to Mr Trump’s demands, more accommodating of them, in order to try and preserve the stability of the alliance?

UK Cabinet Encourages NATO Member States to Reach 2% Defense Spending Target
Nikola Mirkovic: I don’t know. This is the tricky question, because now we see in the European Union that there is no more consensus, there really is no more consensus on different matters. Maybe we might start seeing some divergent opinions. Concerning NATO, this is something that is relatively new in the European discussion, the fact that maybe, some countries would like to get out of NATO.

None of the officials of any European country today has voiced that position, but I think that seeing the current situation, seeing what happened at the G7, seeing the current status of the European Union, which is very bad, some may want to do whatever is possible to try to save the Atlantic alliance.

So, we may start seeing some hawks going in any direction to try to save the alliance. Some countries may also start voicing their own interests and maybe a different view on Europe and on the relationship that Europe should be having with the United States.

The views and opinions expressed in this article are those of Nikola Mirkovic and do not necessarily reflect Sputnik's position.