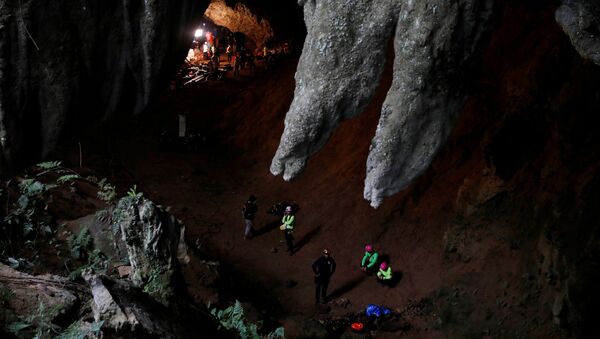 BANGKOK (Sputnik) - The rescue team, which discovered earlier on Monday 12 children who had been trapped in a flooded cave in northern Thailand for over a week, is now considering two ways of getting the teenagers out of the cave, local media reported.

According to the Thai PBS TV channel, the first solution provides for bringing the children and their coach to the surface through over a 6-kilometer (3.7-mile) route, which was used by rescue divers during their search operation. This route consists of cave sections fully filled with water. If this path is used, the rescue team will stretch a rope throughout the cave so that the divers and missing children be able to hold it in order to deal with strong current in the cave.

The second option implies the evacuation through the cave's ceiling, where a well is currently being drilled. If the drilling is successful, the teenagers and their coach might be rescued with ropes, the broadcaster reported, citing the rescue team's headquarters.

The TV channel has also showed a photograph depicting the teenagers smiling. The photograph has been made by the members of the rescue team.

Thai Authorities Find 12 Boys, Coach Alive After 9 Days Missing – Governor
Earlier on Monday, the Thai authorities announced that all the 12 teenagers from the local football team and their coach, who went missing in Thailand's northern province of Chiang Rai on June 23 after they left for exploring the Tham Luang cave, were found.

On June 23, several hours after the 12 boys and their coach entered the Tham Luang cave, heavy rain started preventing them from leaving it. Over 1,000 Thai military personnel, rescuers and volunteers from Thailand and other states participated in the operation to find the group. Australia, the United Kingdom, and the United States dispatched their military personnel to assist the Thai forces in the rescue operation. It was reportedly the UK rescue divers who have managed to find the missing boys.