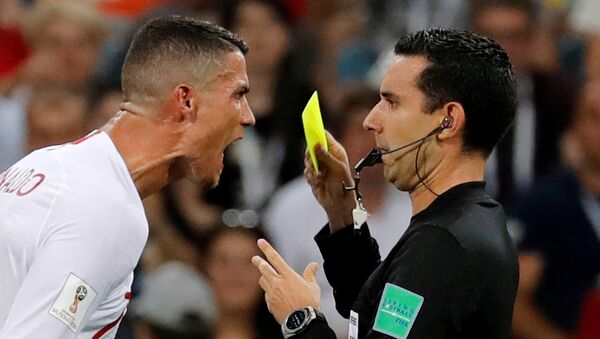 Just hours after France knocked Lionel Messi's Argentinian team out of the World Cup, Cristiano Ronaldo's Portugal was also eliminated from the tournament after being defeated by Uruguay 2-1 Saturday in the round of 16.

World Cup fans employed their lip reading skills and intuition to find out what the 33-yer-old shouted to the referee late in the game to get booked with a yellow.

Although some fans might say that the Portuguese international star deserved a better ending, referee Cesar Ramos apparently thought the only thing he deserved was a yellow card for Ronaldo's protests over a perceived Uruguay foul in second-half injury time.

World Cup fans took to Twitter to find out who knew best what Ronaldo had said to the referee.

Twitter reactions seem to be wide-ranging: some users suppose that Ronaldo was going to hit the ref, while others think that Portugal's star said he didn't want to bow out of the tournament that early.

Referee: It has been written, am sorry pic.twitter.com/GaQAhMJs6S

Ronaldo: You don't want me to qualify? You want me to be unfortunate? Haba!!

Referee: GOAT, you're leaving asun as possible, to join your fellow GOAT!

RONALDO: I go Slap you now o, you no know who I be ni?
REFEREE: Shut up idiot, Are you MESSI? pic.twitter.com/6rsg0oBTCs

“What Ronaldo said” He could have said, “Excuse me sir, could you please reconsider your decision”, surely it’s getting up in his face that is the issue?!

The dominating opinion is that it was Ronaldo's foul language that prompted the match official to wave a yellow.

Did anyone read Ronaldo’s lips to the ref? He said FUCK YOU and got a yellow.

Buffon got a straight red so I’m sure he said “I’ll murder your family” then left the field and told him to eat chips and sprite.

Did he just use F*ck you,Ronaldo is such a loser..

Ronaldo shouting, “F*** you,” right in the referee’s face. He never fails to disappoint. What a piece of work. #FootballWorldCup2018 #worldcup #ronaldo

Ronaldo and his Portuguese team mates need to learn some manners!! Shouting F*** you in the refs face is not ok!! 😐😐😐⚽⚽⚽

And how many times do I have to watch Ronaldo screaming "F*** you" in a referee's face. Unacceptable

Some users, however, have contended that Ronaldo's been asking for a penalty.