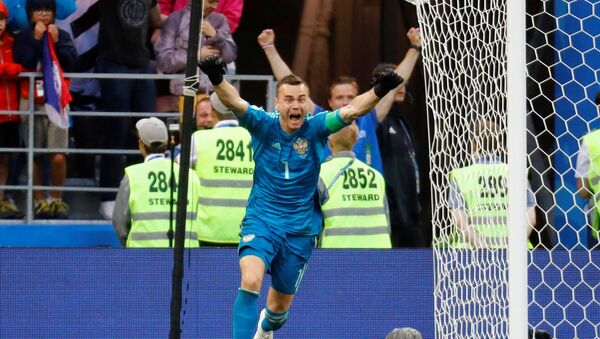 While the Russian and Spanish football teams clashed during the FIFA World Cup match on Sunday, social media outlets erupted with a barrage of memes and joking comments related to the flow of the game.

As the two teams vied to determine who would continue on to the quarterfinals and who would return home in defeat, thousands of football fans and casual observers watched the game and commented on its flow.

Spain was technically the first to score during the match, as Russia’s Sergei Ignashevich landed an own goal.

What type of record is this? "Sergei Ignashevich is the oldest ever player to score an own goal in a #WorldCup at the age of 38 years, 352 days." #ESPRUS pic.twitter.com/1KwULwKzP5

Thought Impractical Joker @jamessmurray was on the pitch. Then after that joke of a tackle/ own goal, I’m still pretty sure he’s switched places with Ignashevich! 😂 #worldcup #lookalike #SPNRUS pic.twitter.com/ws6qaNC1oH

After a penalty shot allowed Russia to even the score, some users joked about Russian President Vladimir Putin clandestinely aiding his team.

Is Russia actually good or did Putin do some negotiating? #SpaRus pic.twitter.com/i3XUUsDEv4

No one could explain the blackout in the VAR studio that handed the Russian's a dubious penalty. #SPARUS pic.twitter.com/KDHDt7N0bt

Others poked fun at Gerard Pique’s handball that allowed Russia to take a penalty shot.

Piqué just wanted to show his support for the King In the North! #HandsUp #SPARUS pic.twitter.com/ymQrQWjpNX

So how are you supposed to jump? #WorldCup2018 #SPARUS #VARcicle pic.twitter.com/k5hx4pvcoI

A number of people shared their thoughts about the Spanish team.

Moreover, there was also no shortage of people complaining about how boring they thought the match was.

Out of Spain's gazillion passes, I reckon only about 25% of them go forward. Always sideways or backwards.
Boring their opponents to death
#ESP #RUS #SPARUS #WorldCup

And after the match finally culminated in a penalty shootout after which Russia managed to clutch a stunning 4-3 victory, a stunned audience tried to make sense of what happened.

New quote when you lose a penalty

Poor #Iniesta — what a wonderful player. Sad way to end his time with the Spanish team. #Spain have been a really strong team for so many years. Lots of brilliant players, capable of such beautiful football. Till the next world cup! #SPARUS #ESPRUS #WorldCup2018 #WorldCup

This was not meant to happen.
This couldn't happen.
This is happening..
Spain are out of the WC#SoccerShocker 😱 #SPARUS

Penalties are also known as #Russian roulette. Well, the Russian team played this well. While 2010 world champs of Spain lick their wounds, the#Russian team makes sure many of the 135 million Russians will watch the quarter finals of #WorldCup2018 #CongratstoRussia #SpaRus