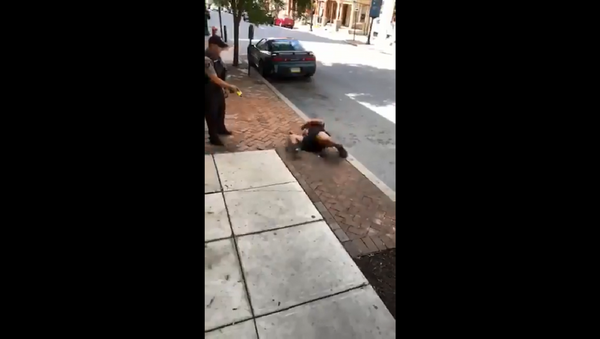 Lancaster, Pennsylvania, Mayor Danene Sorace announced Thursday that an investigation has been opened into what appears to be the unprovoked use of a taser by police against a black man sitting on a curb, appearing to try to follow police instructions. The event was caught on video by a bystander.

The video shows the process of police detaining 27-year-old Sean Williams on Thursday. It begins with an officer pointing a taser at him and ordering him to sit on the curb. Williams complies. The officer tells him to point his legs straight out. Williams doesn't extend them completely, but he does extend them further after police repeat their orders twice.

Another officer then orders him to cross his legs. As Williams begins to do so, he also retracts them and gets tasered from behind.

The man then writhes for some time before cops order him to lie down on his stomach and extend his limbs. He does and he is then placed in handcuffs.

The man filming the video says, "He was sitting down, bro. That's crazy. That's why I record everything."

This police officer in Lancaster, Pennsylvania should be fired immediately. After he is fired, the District Attorney should immediately press charges for criminal assault.

What he did here is completely illegal.

This man was compliant, calm, unarmed, and non-violent. pic.twitter.com/kJCjzAoBiE

​Police said in a statement that other people at the scene said told them that Williams had been exhibiting increasing erratic behavior for the last few days. "Williams was instructed to stick his legs straight out in front of him and to cross his ankles," the statement added. "This is done as a measure of control to insure that if someone is going to flee or offer physical resistance, they will have to move their legs under them to do so."

Police say they were called because somebody was threatening people with a bat. However, no bat was found and witnesses later told police that there was no bat involved, but that Williams had been asking to fight somebody. Williams was not arrested for any actions he made on Thursday. Rather, police ran a check on Williams and found that he had an outstanding warrant for possession of a controlled substance and public drunkenness related to a prior offense. He was taken into police custody for that reason.

​"Like you, when I saw the video I was upset by it, and it is of great concern to me and we take the use of force very seriously," Sorace said in a video statement uploaded by the city government's Facebook page. "There is an investigation that has already commenced regarding the use of force in this incident and we are in communication with other civil rights groups and other individuals to address the concerns."

Lancaster resident and member of the People's Congress of Resistance Nick Silveri-Hiller told Sputnik, "The recent video of police brutality is tragically not an unique experience for poor and working class communities, particularly communities of color. Lancaster… is currently experiencing the effects of gentrification. This process typically includes an increase in policing of poor and working class communities. This incident is unique only in that it was captured on camera and has been shared with thousands of people across the country. The video of this unnecessary use of force has triggered community outrage and condemnation."

Local organizations have called for a demonstration on Friday evening and are demanding that the offending officers be suspended immediately pending an investigation and that a Citizen's Review Board for Police in Lancaster City be formed, he said.

The People's Congress of Resistance describes itself as an expression of direct democracy in the US aimed at planning and guiding resistance to policies by the current administration that negatively impact the working class and marginalized communities and envisioning alternatives.

The local NAACP chapter put out a statement on the video, saying, "Social media has played an important role in bringing such interactions to public knowledge, strengthening our awareness of wrongs and our work toward justice. They also do not give us a full understanding of a series of events; a full understanding requires a full investigation." The NAACP noted they've been talking to the office of the mayor.

Sorace says that the event affirmed her resolve to implement a body-worn camera program for police in the city.