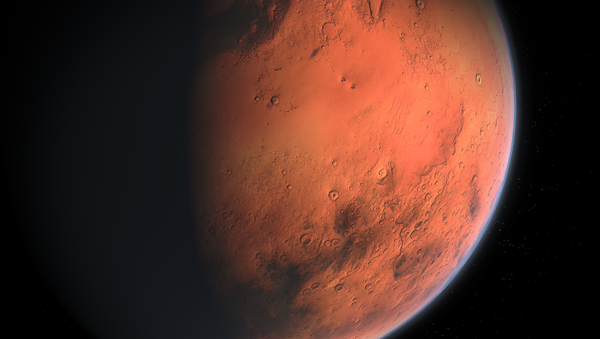 Turns out that Mars' crust formed only 20 million years after the formation of the Solar System, further suggesting it also got a 100-million-year jump on Earth in terms of habitability, according to a new study published in the journal Nature Wednesday.

The development of a planet's crust is the final stage in planet formation and begins with "the accretion of particles from the protoplanetary gas disk," Science News explained, adding that said particles later make up a hot magma ocean that then forms a metallic core and outer crust once it cools. The process typically takes anywhere 30 million to 100 million years.

Researchers led by officials from the Center for Star and Planet Formation (CSPF) at the Natural History Museum of Denmark came to their conclusions after examining extracts from the "Black Beauty" meteorite. Said space rock, which is thought to have originated from Mars' crust, crash landed into the Sahara Desert in 2011.

"Our results indicate that Mars fully solidified and cooled within 20 million years of Solar System formation," Martin Bizzarro, an author of the study from CSPF, told Newsweek. "This means that liquid water could have existed at the surface of the planet by that time and, hence, this environment may have been amiable for life to develop."

"This is much earlier than Earth, by about 100 million years, meaning that life may have first originated on Mars," Bizzarro added, before stressing that "this is speculative and requires additional evidence."

As the meteorite contained traces of zircon, a mineral that acts as a "time capsule," researchers were able to determine the age at which the Martian crust formed by measuring the lead decaying from uranium trapped in the zircon.

"We discovered the oldest minerals — zircons — from Mars," Bizzarro told the publication. "These zircons, which are about 100 million years older than the oldest terrestrial zircons, tell us that Mars had evolved a crust much earlier than Earth."

The study also offered new evidence proving that planets are able to form much faster than previously thought.

"Once the planet is formed by this process, it rapidly differentiates and crystallizes to form a crust. Earlier models suggested that planetary differentiation may take up to 100 million years," Bizzaro added.

At present time there are two models that details a planet's formation: one which offers a time scale of 50 to 100 million years and another that suggests a much shorter time span.