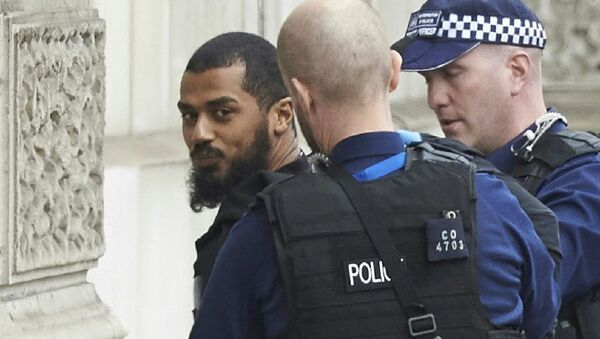 A British citizen who was arrested in Whitehall with three knives last year has been convicted of planning to stab MPs. Khalid Ali, who had been trained in bombmaking by al-Qaeda in Afghanistan, had planned to send a message to the UK's "hierarchy."

On Tuesday, June 26, Ali, a gas fitter from north London, was found guilty of possessing explosives overseas and preparing an act of terrorism in the UK.

He had denied being a Taliban and al-Qaeda bombmaker or planning to kill MPs or police officers on April 27 last year.

The attack would have taken place only a month after a murderous van and knife attack at the Houses of Parliament.

Ali told police the knives were only for his "protection" and he did not intend to kill anyone.

Khalid Ali, a gas fitter from North London, has been found guilty of being an Al Qaeda bomb maker in Afghanistan; and planning to kill police officers, soldiers or MPs in a knife attack in Whitehall last year. pic.twitter.com/glbcMxKkbS

​The trial was shown dramatic body camera footage of armed police officers swooping on Ali as he walked down the street near Downing Street.

They found three new Sabatier knives in his pockets and waistband.

CCTV footage from earlier that day showed him buying the knives and getting an underground train to Westminster.

During police interviews after his arrest Ali said he was there to defend himself and his fellow Muslims.

Khalid Ali is wearing a smart, dark blue, collared shirt and stood with his hands behind his back, looking down. He did not react as the unanimous verdicts were returned.

​"If you thought that Trump guy is bad, letting off nukes, or that Kim guy in Korea, that's nothing, that's baby stuff to what's about to take place. You thought Bin Laden was bad enough, Bin Laden, that's nothing," Ali told police.

"It is clear that there is a war on Islam. I would describe myself as a mujahid," he told police.

But Ali denied he had intended to stab MPs, police officers or soliders.

He said he was simply going to send a message to "those who are running the country."

"It is apparent to me that Ali spent some considerable years helping the Taliban create — and maybe even detonate — bombs which could maim and kill many people in Afghanistan. All this before turning his attention to killing people in his home country," said Metropolitan Police Deputy Assistant Commissioner Dean Haydon, the Senior National Coordinator for Counter Terrorism Policing.

"His intended targets were people who represented the UK authorities and he demonstrated a particular interest in the police, how they worked and what their capability was. Ali did not count on the joined-up working of the UK counter terrorism network and its partners internationally. Together, we have stopped a terrorist attack and put before the courts an individual whom I suspect thought would never be held to account for his crimes overseas," said Mr. Haydon.

Ali will be sentenced on July 20.