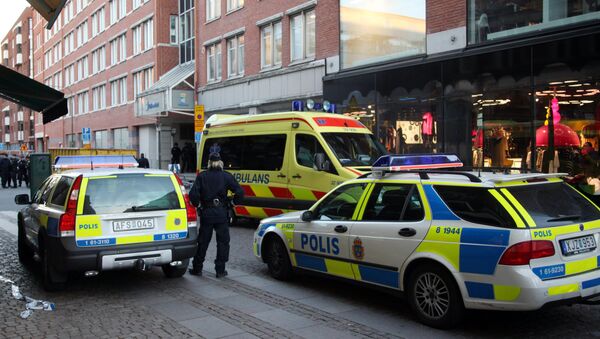 © AFP 2023 / ANDREAS HILLERGREN / SCANPIX SWEDEN
Subscribe
International
India
Africa
Danes who have settled in Malmö, southern Sweden, and known as the country's "most multicultural city" point to the growing sense of insecurity caused by the authorities' inability to tackle the spike in crimes.

The recent spate of gang shootouts amid widespread crime that peaked in a mass shooting leaving three dead and three injured earlier this week has triggered Danes residing in Malmö to reconsider their stay in Sweden on the other side of the Øresund Strait citing a growing feeling of insecurity, the Danish newspaper Jyllands-Posten reported.

Danish man Sune Palsgård, who has himself witnessed shooting episodes in public, argued that the situation is only getting worse, with the authorities being unable to do anything about it.

"This is one of the reasons why I'm moving out from Malmö before the end of the year. It seems that the whole thing just keeps escalating without anything being done," Palsgård said.

Palsgård has lived in Malmö for 11 years, but now his patience has worn thin.

"I witnessed shots fired just in front of my window this winter. And I live in an area with many retirees. There were two gangs who arrived on scooters and started shooting. It is very unsafe," Sune Palsgård said.

Although the Swedish police have admittedly invested additional resources into fighting crime, Palsgård doesn't believe the problem is being taken seriously enough in the higher echelons of the system.

"The worst thing is that I do not believe there is actually any sort of political will to do something about it. In Denmark, you have fervent debates especially on social media, and then it all ends up finding a kind of common footing and getting things done. This does not happen in Sweden, and it's frustrating," Palsgård said.

According to Swedish police, hardened criminals were hit in the Monday shooting. Eyewitnesses reported automatic weapons being fired in front on an Internet café in central Malmö.

Gunmen wounded three people near the #Malmö police station. witnesses. It happened very near to our apartment. #Sweden pic.twitter.com/BED6KNUcDg

​In recent months, shooting has become a fixture of Malmö's daily life. The most recent case involves a 25-year-old man with suspected ties to gangland crime who was shot on Thursday night.

​A 2017 report identified around 5,000 gang criminals and 200 criminal networks prowling 61 "vulnerable areas" in the nation's largest cities. Malmö has three such areas, and the local police keep an eye on over 200 people with gang affiliations amid thinly-stretched resources. Meanwhile, the total number of shootings in Sweden has increased five-fold in the past twelve years.

Malmö is Sweden's third-largest city with a population of 330,000. It lies opposite Copenhagen across the Øresund Bridge and is seen as part of a huge Swedish-Danish agglomeration stretching over both sides of the Øresund straight and home to four million.

In 2017, approximately over half of Malmö's population had at least one parent born abroad. The Danish diaspora has historically been the largest, but has in recent years been overtaken by Iraqis, people from the former Yugoslavia and the Horn of Africa.