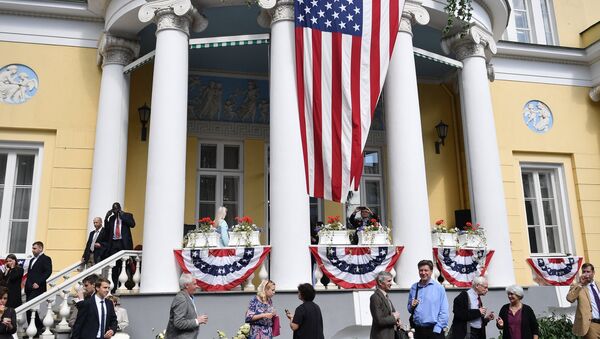 A new report claims that the number of travelers in the US will hit an all-time highest this upcoming 4th of July, pushing fuel and consumer prices higher and likely contributing to the broader US economic growth.

Kristian Rouz — A US automotive advocacy group is expecting the highest number of Americans on record to travel during the upcoming 4th of July holidays, pushing the demand for petrol and fuel prices higher. This, in turn, is expected to contribute to the US GDP, whilst also spurring inflation, as higher disposable incomes are projected to boost consumer demand.

According to a report from the American Automobile Association (AAA), roughly 46.9 mln people in the US will travel at least 50 miles over the upcoming holidays, adding to the typically elevated demand for petrol throughout the summer holiday season.

This is the highest number of travelers on record. The AAA started tracking travel data 18 years ago. The 4th of July holidays will take place between July 3 and July 8 this year.

"Confident consumers with additional disposable income will look to spend on travel this holiday, building on an already busy summer travel season," Bill Sutherland of AAA Travel and Publishing said.

The AAA's report comes amidst the already high gasoline prices across the US, supported by increased US exports of crude oil and fuel, as well as lower inventories. However, petrol prices across the US have recently decreased slightly, retreating to $2.87 per gallon, from this year's average high of $2.97 per gallon posted on Memorial Day over the last weekend of May.

US gasoline prices are still up some $0.59 per gallon from a year ago.

"If demand continues to strengthen and inventories decrease in the weeks ahead, motorists can expect gas prices do a reversal and start to increase again," Michael Blasky of AAA Northern California said.

According to a separate report from the Energy Information Administration (EIA), the demand for petrol has risen to its highest record of 9.88 mln bpd in the first week of June. This also comes amidst a steady increase in US oil extraction and processing, albeit the rising exports are pushing refinery input costs higher.

US consumption of petrol accounts for 10 percent of the global demand, meaning the seasonal factors and the rising disposable incomes of Americans will likely affect global energy prices as well.

The AAA also forecast travel by car will rise by 5.1 percent or some 2 mln more travelers compared with last year, to about 39.7 mln people. This would be the fourth consecutive year of gains in car travel, despite the gradually increasing petrol prices.

Additionally, the Transportation Security Administration (TSA) is bracing for a looming sharp increase in air travel this coming 4th of July. The number of airline passenger is poised to rise to 3.76 mln people, which would constitute a 7.9-percent annual increase.

Meanwhile, US crude prices could sharply increase over the upcoming several months due to a lack of pipeline infrastructure in Texas. Oil drillers in the Permian Basin say they are near full pipeline capacity, meaning additional commission of oil rigs could cause disruptions to US oil supply.

Transportation Security Administration is asking international airports with direct flights to the U.S. to take closer look at containers of powders at checkpoints. Focus is on containers size of soda can or larger. This is not a ban but recommend you pack it in checked luggage. pic.twitter.com/IxpjCcdBOg

​"The market has been assuming a straight line production growth from the US, but infrastructure constraints mean that's clearly not going to be the case," Amrita Sen of Energy Aspects Ltd. said. "At a time when outages are rising the US is not going to fill the gap either."

This might contribute to an even faster inflation by the year-end, prompting the Federal Reserve to tighten its rate policy more aggressively than currently expected.

The AAA also noted that the main holiday falls on a Wednesday, meaning there will likely be elevated numbers of air travelers during the weekends before and after the 4th of July.