US Can Only 'Gain Credibility by Leaving' UN OHCHR - Analysts 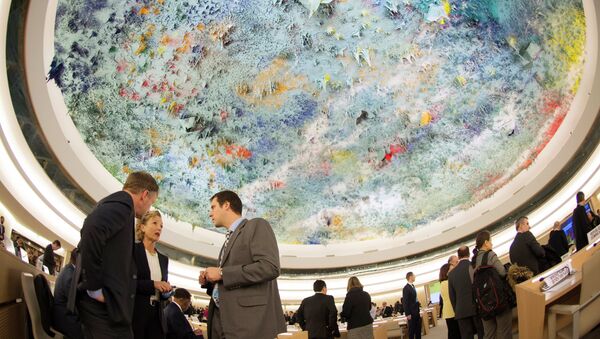 The US has finally left the UN Human Rights Council, after months of threatening to do so. Will this scupper the chance of world peace in our lifetime?

Sputnik spoke with Vesselin Popovski Senior Academic at the United Nations University Institute former diplomat and political commentator Annika H Rothestein as well as with Professor of International Law and Practice, Emeritus at Princeton University for more insights on the issue.

Sputnik: Why has the US decided to quit and was it justified?

Vesselin Popovski: It’s better to be in the room when such issues are decided. Countries rotate in and out every 3 years and the original groups decide which stay so from time to time, certain countries that the US is not aligned with can become members of the UN human rights council and I don’t feel that there is anything wrong with this.

The UN is all inclusive and every country can be part of it and being in the council helps countries to think about their own human rights record. Generally, the point made by Nikki Haley, that the council is biased, is true, but on the other hand, let’s see who we are talking about.

US Pulls Out of UN Human Rights Council After Accusing Body of Anti-Israel Bias
We are talking about Saudi Arabia and the US President has had a great visit there, North Korea, where Trump has done the same, so the person who has done favours for human rights abusers is the US President, not the human rights council.

Annika H Rothestein: I think it’s highly justified for the reason that it has become a sham and has been for quite some time. It consists of states that are some of the worst perpetrators of human rights abuses.

President Trump has decided to be a leader when it comes to these issues and part of this leadership sometimes entails leaving and not participating in mocking the issues it claims to stand for, so I think it was a great decision.

Richard A Falk: I think the U.S. withdrawal decision was long intended, and should be understood as mainly a gesture pleasing to Israel and Netanyahu, as well as to the major American Zionist donors to Trump’s presidential campaign. It also exhibits the tendency of the Trump presidency to withdraw from any international engagement that is not in accord with its ultra-nationalist priorities, which include refusing to accept criticism for U.S. human rights failures such as the present crisis of family separation arising from a harsh deportation policy at the Mexican border.

Sputnik: Will the decision reduce the US’s credibility in the West?

World
US Exit From UN Human Rights Council Shows Double Standards - Foreign Ministry
Annika H Rothestein: The most laughable thing is that the UN has credibility at this point and the US can only gain credibility by leaving. I don’t understand what the council does at this point, considering the member states.

It’s like having a jury that consists of rapists and murders coming up with a verdict on their own trial. It’s become this absurdity and I feel that if you really want to take a stand for human rights, then the only right thing to do is to leave the council.

Sputnik: Does the UN have an anti-Israel bias?

Israel has learnt to live with this, and the US’s decision is not a friendly pat on the back to Israel by any means. Nikki Haley said it really well when she stated that it has become an exercise in hypocrisy and has stripped the council of the fake legitimacy that it once had.

Sputnik: What does this wave of recent US withdrawals from various international pacts indicate about the country’s foreign policy at the moment?

Richard A Falk: These withdrawals are all part of the Trump pledge to put ‘America first.’ He likes to tell his political rallies that he was elected to be ‘President of America and not President of the World.’ In effect, the U.S. is retreating from the position it has held since 1945 as a global leader, and overall supporter of international institutions and agreements, especially bearing on world trade arrangements. Now it seems ready and willing to initiate a trade war, which while mainly directed at China, will imperil the world, including the United States itself. There appears to be a consistent effort to rewrite international relations in ways favorable to the short-term material interests of the U.S., by relying on the leverage of hard power disparities. These interests are predominantly calculated by reference to money.