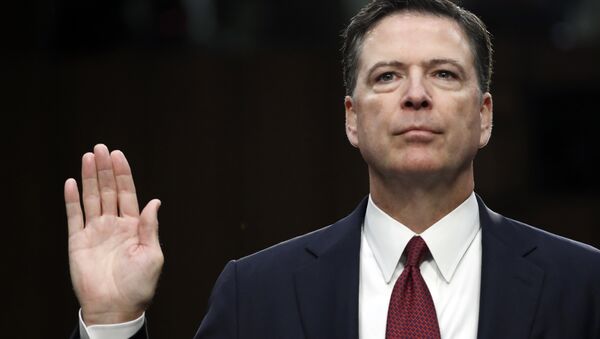 Former FBI Director James Comey has refused to apologize to former Secretary of State Hillary Clinton, saying that nearly a year after the closing of the investigation into her email servers, she “still doesn’t understand what this investigation, in her case, was about.”

Comey took questions about the probe at an event in Berlin, Germany, Tuesday, one day after he was invited — and declined — to attend the US Senate Judiciary Committee Hearing on the Office of Inspector General (OIG) report, which focused extensively on the same investigation, marking yet another example of the former director's possible preference for speaking to journalists over speaking to authorities.

​Moderator Holger Stark brought up the revelation in the OIG report that Comey had conducted official FBI business from a personal email account. "[Clinton] tweeted, ‘But my emails. Is this a good moment to apologize to her?" the journalist asked.

"No," Comey fired back. "I don't want to criticize her, but it shows me that even at this late date she doesn't understand what the investigation, in her case, was about. "It was not about her use of personal email system, and she didn't get that during the investigation… That was not what it was about. It was about communicating about classified topics on that system, when those topics have to be done on a classified system," Comey said, adding that he had not violated such rules.

In light of the larger findings in the OIG report, one may wonder why journalists are asking Comey to apologize — Holger told Comey he was "irritated" by his private email use — and not asking Clinton why she isn't thanking Comey for his actions as revealed by the report.

For example, in June 2016, as the investigation into Clinton's use of a private email server, a violation of the Federal Records Act, was beginning to end, investigators found three email chains with a total of eight emails that contained a "(C)" marking — meaning that they contained classified information at the "confidential" level. By the time the investigators found them, Comey was already drafting his statement declaring Clinton innocent of any criminal wrongdoing. Clinton told the FBI that she didn't know what "(C)" meant, and then "speculated" that it could have referred to the alphabetization of the paragraph it stood next to.

FBI agents and Justice Department officials who interviewed Clinton said the explanation "strained credulity," according to the OIG report. One of the agents said, "I filed that in the bucket of hard-to-impossible to believe." Nonetheless, Comey proceeded with the drafting of his statement.

Comey tried to hasten the closure of the investigation by threatening US Deputy Attorney General Sally Yates with bringing in a special counsel "to induce the [Justice] Department to move more quickly… and to complete the investigation," according to the OIG report, which found no evidence that he "ever seriously considered requesting a special counsel." Comey had pushed the department to wrap up its case prior to the Democratic National Convention, which began on July 25th, 2016.

On May 2, 2016, Comey shared a draft of his statement with senior leadership of the FBI, criticizing Clinton's handling of classified material as "grossly negligent." The term was later revised to "extremely careless," and utilized by Comey during his July 5, 2016, announcement that the FBI would recommend no charges against Clinton.

​Senator Lindsey Graham (R-SC) apparently seized on the switch-up at the Senate Judiciary hearings Monday. "'Gross negligence' is a criminally liable standard," Graham, a former prosecutor, noted. "So if they had said it the way they originally wrote it, she is guilty of a crime, and the reason they changed it is because she's not guilty of a crime and if you want to 'stop him,' it can't be gross negligence."

Graham's reference to ‘stopping him' referred to FBI Deputy Assistant Director Peter Strzok, who, with then-Special Counsel to the Deputy Director Lisa Page, had exchanged a number of text messages about both "emailgate" and "Russiagate." Page texted Strzok on August 8, 2016: "[Trump's] not ever going to become president, right? Right?!" Strzok replied: "No. No he won't. We'll stop it." Strzok was "in essence" the lead investigator in the Clinton email scandal, according to sworn testimony Monday from Justice Department Inspector General Michael Horowitz, who wrote the OIG report.

"As we read this report, we're reminded of Jim Comey's decision to hold the July 5th press conference and appropriate the charging decision away from the prosecutors," US Senator Trey Gowdy (R-SC) said during opening statements at the OIG report hearing. "We see Jim Comey drafting an exoneration memo before important witnesses, like the target, were even interviewed."