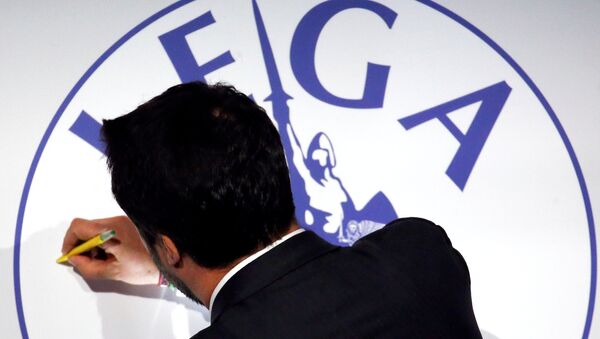 According to the study conducted by the SWG pollster, the League, which enjoys 29.2-percent support, was 0.2 percent ahead of the anti-establishment Five Star Movement (M5S).

Over last week, the League's rating grew by 2.2 percent, while the one of the M5S dipped by 2.5 percent.

"This data confirms the trend that we have been witnessing since the elections and the formation of the Cabinet. The ratings of the League are linked to the approval of the initial government's policy, especially in the fight against illegal migration. This 'honeymoon' is also continuing thanks to the actions of the League leader, Deputy Prime Minister and Interior Minister Matteo Salvini, who managed to outperform M5S allies in the government," professor of political science at the University of Bologna and the head of the Youtrend think tank, Lorenzo Pregliasco, told Sputnik, commenting on the poll results.

Italy's Deputy PM Slams NGO For Calling Him Fascist For Banning Migrant Ships
The poll also showed the continued decline in popularity of the Forza Italia party of former Prime Minister Silvio Berlusconi. In the March election, it lagged behind the forecasts, gaining just 14 percent of the vote and losing the leadership even within the newly formed coalition. Now, it is supported by just 9.2 percent of Italians, the poll revealed.

During the March 4 parliamentary election, the center-right coalition, consisting of the League, Forza Italia, Brothers of Italy, and Us with Italy parties, won around 37 percent of the vote, while the anti-establishment Five Star Movement (M5S) received around 32 percent. The ruling Democratic Party (PD) won 19 percent of the vote.

The new Italian government was formed thanks to the M5S-League agreement, which they formalized in the form of a "government contract" containing a detailed program of the new Cabinet.

The poll was conducted on June 13-18 among 1,500 Italians eligible to vote. The error margin does not exceed 2.5 percentage points.