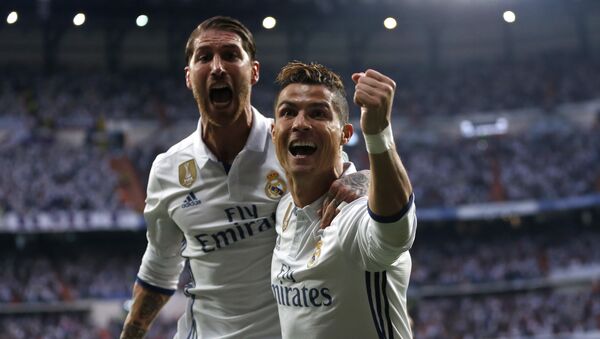 Speaking about the upcoming match on Thursday, Portugal head coach Fernando Santos promised that it would become a "classic" because the teams "know each other well" and want to win the FIFA World Cup in Russia.

"This is a classic game, we have a lot in common and geographically we are neighbors. Neighbors always know each other [well], this game will become a ‘world classic.' We both have the same goal — to win. Spain has a great team and they are very experienced. We played each other before. We always pay attention to Spain and watch their weaknesses. We are ready physically and mentally," Santos told journalists.

As he explained, Portugal has a "long history of losing to Spain," and this summer's tournament might become their opportunity to change it.

Portugal will face 2010 World Cup winners Spain at Sochi's 43,000-seater Fisht Stadium on Friday, before playing Morocco and Iran in their other two Group B matches. Spain will be playing at the World Cup under a new coach, Fernando Hierro, after Julien Lopetegui was sacked on Wednesday. Lopetegui was replaced by Hierro after agreeing to take charge of managerless Real Madrid after the World Cup without notifying the Royal Spanish Football Federation that he was in talks with the club.

Commenting on the change of coach, Spain captain Sergio Ramos called on Thursday the sacking of Lopetegui a tough moment, but appointing Fernando Hierro was the best option considering the circumstances.

"The resignation of Julen [Lopetegui] is a difficult moment, but Fernando is the best option in this situation. We admired him during his football career… A very important match with the European champions is awaiting us," Ramos told journalists.

He also shared his expectations for the upcoming game, saying that he likes playing "alongside Cristiano Ronaldo, not against him," while his team prepares for the FIFA World Cup match against Portugal.

Both Ramos and Ronaldo play for Spanish giants Real Madrid.

"I like to play alongside [Ronaldo], not against him. We [Real Madrid] finished this season in great shape, he [Ronaldo] is a constant danger. Portugal has a great team. I will try to hold him back. And hope that the football fans will like this match," Ramos said.

Throwback to that Cristiano Ronaldo goal vs Spain that got disallowed.

*I'm not sure it should have been as ball was already in when Nani made contact* #WorldCup #POR #ESP pic.twitter.com/2uBAFZ30AO

A similar view has been voiced by Portugal head coach Fernando Santos, who that star striker Cristiano Ronaldo was an "extraordinary" captain of Portugal's 2018 FIFA World Cup squad.

"Cristiano [Ronaldo] is an extraordinary captain. You know… what kind of player he is. He has a strong positive influence on the team, both on and off the pitch. He plays a certain role, I play a certain role, but the team is the most important [component of success]. And he understands it, too," Santos told journalists.

As the Portugal footballer stressed, their team was ready to fight for the victory.

"Every member of our team is ready and understands his goals. We have a worthy rival… I can't tell you who will win. We are ready," Santos added.

"I think Portugal is one of the favorites to win the World Cup. There can be many favorites, and we are the European champions anyway. Perhaps, we're not the main favorites, but our team is ambitious, we set high goals. We know how to play Spain. Their team is strong, we need to put in a lot of effort to defeat them," Moutinho told journalists.

He added that Portugal was going to do their best to win.

The 2018 FIFA World Cup will last till July 15, with the games set to be played at 12 stadiums across 11 Russian cities.