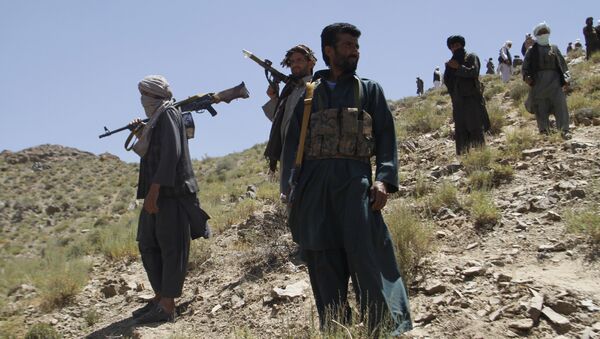 © AP Photo / Allauddin Khan
Subscribe
Along with Taliban leader Mullah Fazlullah, killed in a strike near the border with Afghanistan on Thursday, four more TTP commanders were killed in the attack, the TOLOnews broadcaster reported.

The Leader of the Tehrik-e-Taliban Pakistan (TTP) extremist group, Mullah Fazlullah, was killed by a US drone strike in the northeastern Afghan province of Kunar, Reuters reported, citing senior Afghan Defense Ministry official.

The strike was confirmed by US Forces-Afghanistan spokesman Lt. Col. Martin O’Donnell, who said that the operation had targeted a senior leader of the terrorist organization without naming the person.

Afghanistan is in a state of political and social turmoil, with government forces fighting the continuing Taliban insurgency, while other extremist groups, such as the *Daesh terrorist group, have also expanded their activities both in the country and neighboring states.