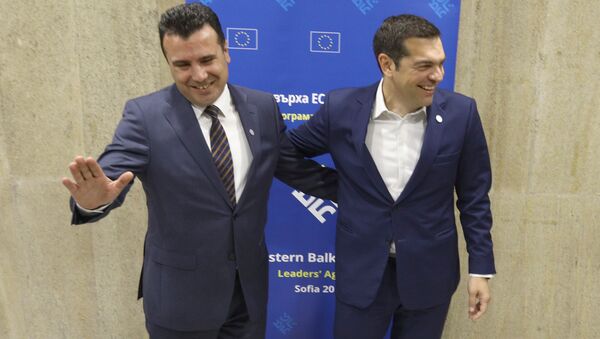 © REUTERS / Stoyan Nenov
Subscribe
ATHENS (Sputnik) - Greek Prime Minister Alexis Tsipras said that he had reached a "good agreement" with Skopje on the constitutional name of the Republic of Macedonia, adding that it satisfied all of Athens' preconditions.

Macedonia will be named the Republic of North Macedonia, or Severna Makedonija in Macedonian, after reaching a deal with Greece on the decades-long name issue, Macedonian Prime Minister Zoran Zaev said.

"Dear fellow citizens, we have [made] a historic decision… The name [will be] the Republic of North Macedonia translated into all languages for general use," Zaev said, as aired by the Macedonian TV channels.

We have a good agreement that covers all of the conditions put forth by the Greek side. We have a combined name with a geographic qualifier for all uses," Tsipras said as quoted by the Athens-Macedonian News Agency (AMNA) news agency.

The Greek prime minister will now inform the country’s president and will later give a televised statement.

Macedonian Prime Minister Zoran Zaev said on May 19 that the name of the "Republic of Ilinden Macedonia" could be a possible compromise to be reached between Skopje and Athens in a dispute over the name of the country.

Macedonia Must Revise Constitution to Resolve Republic's Name Issue - Tsipras
Greece and Macedonia are involved in a longtime dispute over the name of the Republic of Macedonia. Greece regards "Macedonia" as a term referring only to one of its northern regions and the ancient Kingdom of Macedonia, and insists on the use of another name for its northern neighbor.

In the 1995 interim bilateral accord, Greece agreed that the term "the Former Yugoslav Republic of Macedonia" (FYROM) would be applied to Macedonia until the dispute is settled. The name issue has been blocking Skopje's aspirations to join NATO and the European Union for years.

000000
Popular comments
It's a major crime against truth, justice and peace.