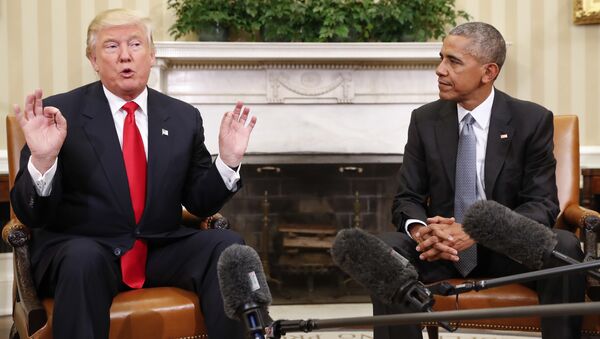 Sources close to the president of the United States have apparently reported divergent takes on how to capture his policy approach succinctly, but all the stabs at the “Trump Doctrine” are revelatory in one way or another.

A recent article published in the Atlantic claims to have found the true picture of US President Donald Trump's approach toward politics, which is often portrayed as thoughtless, chaotic, authoritarian and whimsical: Trump follows the "F*ck Obama Doctrine."

Speaking with personal friends of Trump and administration officials, the Atlantic's Jeffrey Goldberg reports that Trump is just fine with having his presidency be defined as a nullification of former President Barack Obama's signature achievements.

Another White House official refuted the claim that it might be "too early" to determine if Trump has a coherent political philosophy while speaking with the Atlantic. "No, there's definitely a Trump Doctrine," the senior official noted.

Other pithy descriptions of the Trump doctrine by current US officials included, "No friends, no enemies" and "permanent destabilization creates American advantage."

On paper, Trump's achievements arguably most align with the idea that he is out to undo everything that his predecessor did or sought to do and then some. Some of Obama's achievements that have come under attack by 45 include negotiating the 2015 Iran Nuclear Deal, signing the Paris Climate Accord and passing into law the Affordable Care Act (ACA), also known as Obamacare.

In his eagerness, the president has taken some victory laps too early, as when, seeking to blow up the Affordable Care Act in May 2017, Republicans gathered outside the White House to celebrate the repeal of the ACA — except the actual repeal bill never gained approval in the GOP-majority Senate after Sen. John McCain (R-AZ) voted against the measure, much to Trump's dismay.

Archives from the Obama White House have dubbed the Trans-Pacific Partnership (TPP) "Obama's Trade Agreement." Obama actually concluded negotiations with the 11 other countries in TPP but was unable to garner the necessary support from Congress to have the agreement take effect before he left office in January 2017. Trump has subsequently unraveled any possibility of US involvement in the North American-Asian multilateral trade agreement since taking office.

The TPP was "the centerpiece of President Barack Obama's strategic pivot to Asia," the Council on Foreign Relations noted. Japan, Canada, Australia, Chile and the other remaining members from the TPP are pushing ahead with what's now being called "Comprehensive and Progressive Trans-Pacific Partnership," or TPP-11.