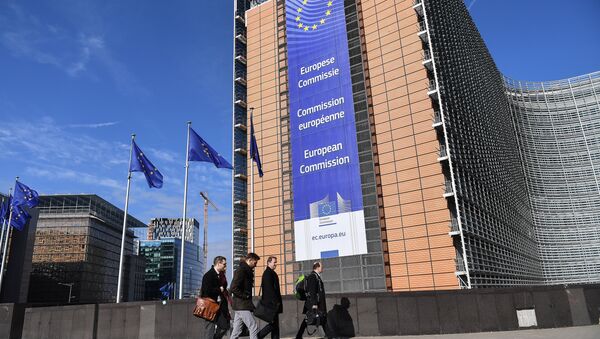 BRUSSELS (Sputnik), Luc Rivet - On June 6, the European Union made what could be a last-ditch effort to persuade the United States not to shatter the EU trade with Iran, and asked Washington in a letter to remove European companies in key sectors from the effect of the sanctions on Iran.

Events have precipitated over the past month after the United States decided to leave the Joint Comprehensive Plan of Action (JCPOA), also known as the Iran nuclear deal, and reimpose sanctions against the Islamic Republic, despite the resentment of other signatories — China, France, Germany, Russia and the United Kingdom — that wanted the agreement to remain.

The reaction of Iran became completely clear earlier in the week when Iranian Supreme Leader Ayatollah Ali Khamenei announced that the country would resume uranium enrichment to a 20-percent purity. Even though this is still far from 80-90 percent necessary for weapons-grade fuel, the step, in fact, means the end of the international agreement.

US Tariffs Aim to Solve Domestic Issues Rather Than Apply Sanctions - AfD Member
Over the past month, EU officials have been desperate to avoid the secondary layer of sanctions that the United States intends to apply: sanctions on any company from a third country that would trade with Tehran. The United States can make use of the fact that the US dollar is the reserve currency mostly used by international banks to finance such trade and investment deals everywhere in the world and in Iran. It can also forbid any economic activity by such companies in the United States.

Despite declarations by German Chancellor Angela Merkel or French President Emmanuel Macron, saying that they would support their national firms to continue their ventures in Iran, all major European firms are disengaging from the country very rapidly, even before the end of the deadline announced by Washington.

The only hope for European firms until now was to obtain an exemption and be permitted to trade with Iran under certain conditions.

Trump’s Exit From International Deals May Be New US Strategy - EU Council Chief
Thus, the letter of ministers from France, Germany, and the United Kingdom along with the EU foreign policy chief Federica Mogherini, addressed to US Secretary of State Mike Pompeo and Secretary of the Treasury Steven Mnuchin, asked Washington to exempt EU entities and individuals from the extraterritorial effects of US secondary sanctions.

The EU letter went further with veiled warnings of potential security issues between the European Union and the United States, explaining that "as allies, we expect that the United States will refrain from taking action to harm Europe’s security interests." This is very strong language in diplomatic terms.

It is interesting to note that Tehran had obviously talked to the European Union and that it is a joint action. Tehran says now that "it will stay in the agreement and wait for the result of its negotiations with the other parties."

For the European Union, this entrenchment of the two sides means a long list of missed economic opportunities. Iran is a market of 80 million potential consumers that have not been able to consume much from abroad since the sanctions were applied. Public infrastructure is in a very bad state and needs modernization. The Western technology for major oil and gas projects is very much needed. But no bank would risk having to pay a fine of 8.83 billion dollars like BNP Paribas had to pay to the United States in 2014 for using dollars in its transactions in Iran.

EU Urges US to Exclude Its Companies From Anti-Iran Sanctions - EU Rep.
Car manufacturers, in particular, the French PSA Peugeot Citroen group, abandon the factories that they had just completed to produce some 150,000 cars per year in Saveh, Iran, mostly for the budding Iranian car market, but also for exports in the region. PSA presently sells 458,000 cars per year in Iran, more than it sells in France. It has a 32-percent market share in the country. Renault, another French car maker, has stopped all its industrial projects in Iran as they own the activity of a large component in the United States, so there is no question that they will protect that activity first.

It is the same for giants such as European aircraft manufacturer Airbus, or Bayer pharmaceutical company for Germany, or France's Total oil and gas firm also leaving the country, to name but a few.

German automakers also sell a lot of expensive cars to the Iranian elite. They are also anxious to lose this juicy market, but they are already the target of US President Donald Trump’s personal remarks, so they would not risk their US presence with sales in Iran.

The extraterritorial effects of the US sanctions pose even a greater threat to small companies, which are not experienced enough to smoothly enter the highly competitive EU market but have great chances to develop on the Iranian market.

"For us the European market is very difficult to penetrate: it is not a growth market for baby food and the marketing costs are huge, since you compete with giants like Nestle or Danone, but in Iran, we could develop rapidly and offer some diversity on the market," Vincent Crahay, the owner of Belgian Belourthe company, producing cereals for babies, told Sputnik.

Crahay indicated, that, taking into account Iran's high birth rate, it was an ideal market for the company, which it would, nevertheless, have to abandon, if the European Union failed to negotiate some exemptions.

For Iran, the reimposition of US sanctions is also a very bad thing, postponing the return of the country to a normal pace of development.

"Middlemen will continue to deliver Western technology in small quantities, selling products from medium-sized or small European companies, but certainly not the well-known brands and market-leading products, for which the United States will be vigilant in their embargo," Turkish businessman Ferhat Targit told Sputnik.

Europe's Ability to Fight for Iran Deal, Nord Stream 2 in Question – Analyst
Matteo Volpe, the managing director of IGV, a medium-size Italian company in the lift industry, suggested using the example of the lift industry to show that the reimposition of sanctions would put an end to the import of modern technologies to Iran and would force the country to use old models.

"The Iranian lift stock is very old and in a bad state of maintenance… Then it improved a little and Turkish, as well as small and medium-sized enterprises from Europe, started to sell in Iran and refurbish buildings. Now, all this will come to a stop, unfortunately. It makes the Iranian lift stock relatively dangerous, in terms of accidents to users and lifts technicians alike. I do not know their official figures, but the accident rate must be much higher than normal," Volpe indicated.

Risks of conflict increase in the region, not only with Israel but less obviously between Shiite Iran and the Sunni states of the region, especially Saudi Arabia, very much afraid of a possible nuclear war capability of Iran, whose new missiles, the Qader, can reach multiple targets with a range of 2,000 kilometers (1,242 miles). It is enough to start a new bloody war in the region.

Sputnik has also contacted several NGOs, such as Peace Nexus, International Alert or Peace Dialogue. The alarm is everywhere in reaction to the aggressive rhetoric developed in the region.

"As human rights and peacebuilding activists we are very much concerned with the latest announcement of the Iranian leadership and think that Iran is really approaching the 'Red Line.' We believe that many civil society actors in this country do not share the position of their government and its militaristic demonstrations," Edgar Khachatryan, a manager of Armenia's Peace Dialogue non-governmental organization, said in an interview with Sputnik.

European Businesses in Iran: Expert Explains How to Get Around US Sanctions
Khachatryan added that, despite the fact that he did not see a risk of a pre-emptive strike by Israel or the United States in the short-term perspective of one year, he was not able to predict further developments since the situation was changing very fast.

For most observers, there is nothing much positive anywhere in sight between Iran, which is stiffening in its isolation, Europe, depressed by its incapacity to influence the game or keep the international agreement alive and that can only send letters to Washington, and the United States and Israel dealing with the Islamic Republic and the Sunni Arab world, which is afraid of the clout gained by Iran in the region.