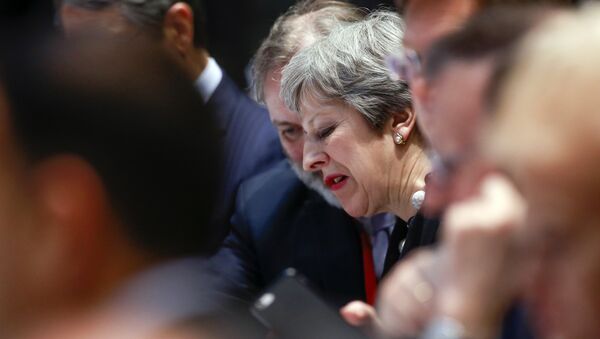 One major Tory party donor has criticized UK’s Prime Minister Theresa May and called for her to be replaced by environment secretary Michael Gove. Crispin Odey, a hedge fund manager who backed the Leave campaign, said May should have joined the civil service rather than becoming a politician.

Sputnik has discussed the UK government’s handling of Brexit with Gavin Barrett, a professor of European Constitutional and Economic Law at University College Dublin.

Sputnik: What are your thoughts on the recent comments by Crispin Odey, who is, of course, a major donor to the Conservative Party?

Gavin Barrett: Political parties do need donors to go about their business, to finance their activities, so I think the Conservative Party will certainly listen to what Crispin Odey has to say and respectfully, but donors don’t get to determine the party’s policies, they don’t get to choose the leadership of the party. That's for the members of the party as a whole and insofar as concerns confidence votes it is for the Conservative Party members of parliament. So it's significant as a barometer I think of how some of its wealthy supporters feel but I don’t think it really goes beyond that.

Brexit Minister Mulls Joint UK-EU Status for Northern Ireland – Reports
I think Odey, if you look at the substance of what he saying, he’s assuming that the problem in the negotiations at the moment it actually Mrs. May herself and that a more hardline MP would do better, but in fact that’s highly unlikely. The core of the problems that the United Kingdom is having in the negotiations at the moment is founded on the fact that they’re really in a very weak bargaining position vis-a-vis the European Union. The European Union really has all the cards in these negotiations and that what would remain the case regardless of who is the British prime minister.

Sputnik: What do you think of the suggestion of Crispin Odey that the UK to start breaching EU rules and just go ahead and start pursuing independent trade deals, what kind of consequences would that have, how dangerous of a scenario is that?

Gavin Barrett: I don’t think that’s a very realistic prospect at all, I mean, there are two elements to this, one, that the UK should start breaching EU rules which are effectively a form of international law, and secondly, that they should pursue independent trade deals. Now in the first place, it is not a good idea for countries generally to go around breaking international law, because if they start doing that today then others can start doing that tomorrow, international relations generally depend on people reaching agreements and then adhering to those agreements, and you know, the UK is as aware of that as anyone else is, as any other international player, so I can’t see them going about their business by breaking rules.

READ MORE: Labour Leader Says PM May 'Too Weak to Stand Up' to US Amid Tariff Row

There’s a strong tradition as well of the rule of law in the United Kingdom and adhering to the rules. So the idea that they would go around unilaterally breaching commitments that they've entered at the international level is highly improbable, and the second point that Odey is making that the UK should now be pursuing independent trade deals and for the time being it would be illegal for the United Kingdom to do that. The second point about that is that it assumes that trade deals are out there to be had and there are a number of reasons why that’s not the case. One of them is that the United Kingdom has far less bargaining power then the European Union. It only has a population of about 60 million and European Union as a whole has a population of about half a billion. So you can imagine who would be first in line to get trade deals in that kind of a situation, it certainly wouldn’t be the United Kingdom and on top of that most countries outside the European Union are simply waiting to see what happens before they enter into trade deals with the United Kingdom because they won't know what they’re buying.

Sputnik: There’s also been this very sort of disturbing government study that says that Britain could actually face food and medicine shortages within two weeks of Brexit if a deal isn’t reached, what are your thoughts on that? Is that a realistic scenario and how frightening is that? Do you think it’s possible that a Brexit a deal will not be reached and there could be serious problems with the provision of the basics?

Gavin Barrett: The prospect of there being no deal at a substantive level it seems almost unimaginable that this would happen, the risks of it are so great, and yes we're still waiting for substantive British government proposals and particularly in relation to how they would maintain a frictionless border with the Republic of Ireland, their nearest neighbor and the European Union have made it plain that in the absence of such a proposals they’re not gonna reach an agreement with them. There are other areas of dispute as well, for instance, the rule of the European Court of Justice.

Business Leaders Ask May for Clarity on UK-EU Trade Relations After Brexit
So we’re getting closer and closer to the time that a deal is needed and it’s felt that in order to get a result they need to agree it by October, but I think the hopes were that they would have at least provisionally agreed on a sketch of a deal agreed by the European Council meeting this June. So it seems unimaginable that they won’t get a deal, and yet we’re getting closer and closer to the situation where that won't happen. In terms of the implications of that actually happening, well, a huge number of areas are actually regulated by European law and all kinds of licensing things, authorization things for pharmaceutical products and licenses for economic actors, even things like people driving trucks across the European Union, all of these things, and licenses for planes to take off and land for traffic between the United Kingdom and the European Union. All of those things lapse in a no deal situation, so a no deal situation would mean economic chaos and the European Commission has regularly been issuing information bulletins indicating that the whole range of things will cease to function if the United Kingdom leaves with a no deal situation. So the gravity of the situation, if the United Kingdom leaves in a no deal situation is not be underestimated, and I think those particular reports constitute a very timely warning in this regards.

Sputnik: One of the biggest obstacles to reaching a deal of course is the situation with Ireland and Northern Ireland, what kind of solutions exist?

Gavin Barrett: There are two that of been put forward by the United Kingdom. I should explain that the border between the Republic of Ireland and Northern Ireland is virtually invisible in the sense that you can drive from the Republic to Northern Ireland without even knowing that you’ve crossed the border, there are no checks, there are no controls of any kind on the border, and of course trade relations with the Republican and Northen Ireland have been very good as a result of that, since that situation has come about in the last 20 years.

It’s Official: UK Economy Grows Slowest in 5 Years Amid Brexit Crossfire
The problem with Brexit is that it would involve the United Kingdom leaving, if Theresa May is to be believed, the customs union and leaving the single market, and the problem with that is that it involves controls on either side, customs controls to levy tariffs on goods crossing the border and also controls in order to ensure that standards for products and agriculture goods and things like that are maintained. So there are great fears that the re-emergence of a border could re-ignite the conflict situation that existed there before and be very damaging to the North-South economy on the island of Ireland, so the Irish government is absolutely insisting that the frictionless border be maintained.