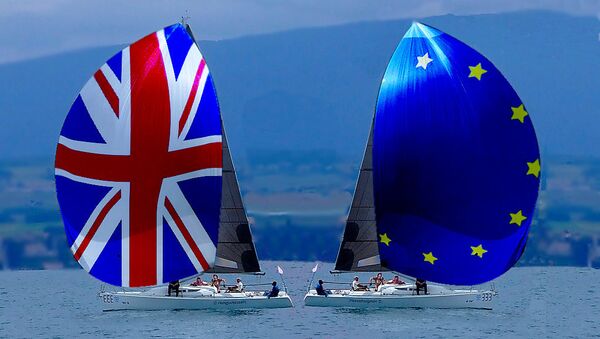 The UK's Office for National Statistics (ONS) has confirmed preliminary GDP growth estimates, saying the economic expansion had indeed slowed to its five-year slowest in 1Q18.

Kristian Rouz — This comes as somewhat of a disappointment for the Brexit camp, but the upside is that the economy averted the negative growth characteristic of many advanced economies in the year's first quarter.

"Overall, the economy performed poorly in the first quarter, with manufacturing growth slowing and weak consumer-facing services," Rob Kent-Smith of the ONS said.

The ONS report erased the hopes that the preliminary figures could have been revised upward. It also confirmed the squeeze on consumer spending, which only rose 0.2 percent, the weakest in some three years. The slowdown was caused by colder weather and snowstorms, which kept shoppers indoors.

Consumer spending rose 1.1 percent year-on-year in Q1, whilst business investment also shrank for the first time in over 12 months.

Additionally, abnormally severe weather conditions hampered construction, which declined 2.7 percent amid lower investment in new residential and commercial property development. Many construction sites were abandoned for weeks in January and February, as strong winds and heavy snow kept workers away from sites due to tight safety regulations.

EU Will Be Flexible on Pre-Brexit Oslo-London Trade Talks - Norway FM
The slowdown in the first quarter, albeit greatly attributed to the harsh winter, still percentage points above a contraction, has stirred concerns of the UK's planned divorce from the EU in March 2019. Brexit naysayers argue that international companies and capital are fleeing Great Britain, saying that's the main reason behind the economic slowdown.

However, as average growth across the economy stood at 0.1 percent amid the gigantic contractions in several sectors, some other sector must have posted equally significant gains.

Overall, the services sector — which drives some 77 percent of the UK's economy — rose 0.3 percent in Q1. Salaries and wages rose 1.6 percent during the first quarter, contributing to the expansion in the demand-side GDP assessment. This also reflects the gains in employment and average earnings and suggests household spending is likely to pick up this ongoing quarter.

Meanwhile, despite the slowdown, the UK has been posting above-zero growth since 4Q12, when the broader European debt crisis was nearing its end. Whilst last quarter's GDP decline in Japan snapped that nation's longest streak of uninterrupted expansion in decades, the UK narrowly avoided the first-quarter trap.

Foreign trade had no impact on GDP growth — albeit in advanced nations foreign trade is typically subtracting from economic expansion. The UK's exports fell 0.5 percent, whilst imports shrank 0.6 percent, suggesting an improvement in the balance sheet.

And things are generally expected to get better due to the solid labor market and the ongoing gradual acceleration in manufacturing output.

"We expect some recovery in the second quarter, with GDP growth of around 1.3% for 2018 as a whole," John Hawksworth of PwC said.

Still, the Bank of England (BoE) is likely to maintain its accommodative policies by keeping its base interest rate at 0.5 percent until at least the third quarter of this year.