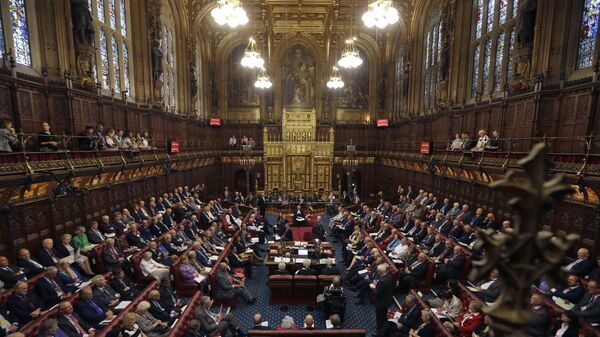 Britain’s House of Lords has voted 15 times to block government legislation enabling the United Kingdom to extricate itself from the European Union.

British Prime Minister Theresa May is facing condemnation from fellow Parliamentarians amid reports that she will seek to overturn the House of Lord’s obstruction of her Brexit legislation in the coming week, setting the stage for another potential challenge to her leadership of the Conservative government.

Theresa May under fire for planning to overturn all 15 Lords defeats on EU Withdrawal Bill ina one day sitting on 12 June. This isn't Parliamentary sovereignty, this isn't taking back control — this is about the will of a dangerous dictatorial Govt. https://t.co/QLHnVatvAZ

Here they are: All of the issues that @theresa_may thinks can be debated and agreed upon in a single day… Please retweet and make sure everyone knows what the @Conservatives are trying to do (bypass fair democratic process by pushing through #Brexit regardless). pic.twitter.com/1lF1cCW9kI

Well who’d of thought
taking back control meant abusing Parliamentary democracy once again.
And from a minority Government too.
One day.
One!
Then a 3 month holiday.
Brexit Britain.
Where democracy died.😞#StopBrexit #FBPE

The government’s EU Withdrawal Bill is due to return to the upper legislative house on Tuesday next week after being consistently delayed.

The Prime Minister’s reported plans to ram through votes on 15 separate aspects of the withdrawal legislation in a single morning sitting has been pounced on by leading members of the Opposition Labour Party.

Tottenham’s outspoken MP David Lammy blasted the Prime Minister’s alleged plans in a statement to the British media, as showing, “total contempt for Parliament. This piece of legislation will have huge consequences for our country for generations to come.”

Withdrawal Agreement to Be Ready by October 2018 - EU’s Chief Brexit Negotiator
Mr. Lammy's comments were echoed by leading Remain —supporting Labour MP Chuka Umunna who said, "This is a shameful attempt by the Government to avoid difficult questions about the chaotic mess they've made of the Brexit negotiations. It is unfortunately in keeping with their whole approach to Brexit: shambolic, lacking transparency or accountability and contemptuous of basic parliamentary scrutiny."

Mrs. May has faced mounting opposition from opposing wings of the Conservative Party, in particular a group around prominent Conservative Remain MP Dominic Grieve who in December joined with the Labour party to vote against the legislation legally enabling Britain to leave the Continental bloc.