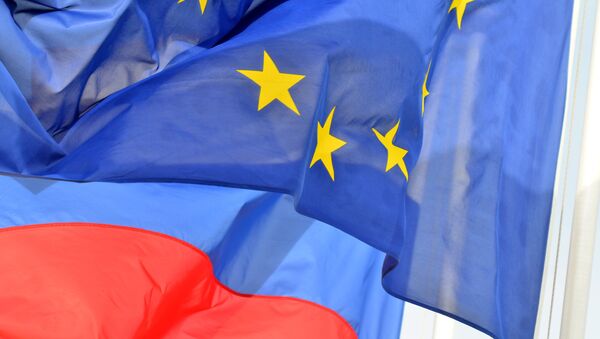 Washington’s decision to walk away from the 2015 nuclear deal with Iran and ramp up tariffs on steel and aluminum imports from the European Union has cost European producers billions in lost revenue and exacerbated US-EU tensions.

In a clear sign of Brussel’s discontent, EU Commission President Jean-Claude Juncker has said that is time for people to stop “Russia bashing.”

Sputnik political observer Igor Gashkov looks at how Russia could avail itself of the current spat between Washington and Brussels to extract certain concessions from the EU in the field of energy exports and on the Ukrainian issue.

EU's Juncker: Europe Must Replace US as Leader After Trump Quits Iran Deal
During their recent summit in Sofia, EU countries offered to buy more US oil and liquefied gas in return for Washington nixing the tariffs.

They also agreed to amend the existing nuclear agreement with Iran by putting additional curbs on Tehran’s weapons development program. After all these offers were rejected by Washington, EU leaders have turned to Moscow.

“I do think we have to reconnect with Russia,” Juncker told an audience in Brussels.

“I am not very happy with the state of our relations. We will never accept what Russia did with Crimea or eastern Ukraine. But nevertheless, we have to have in mind that the entire territory of the European Union is about 5.5 million square kilometers. Russia [is] 70.5 million [sq. km],” he added.

In an interview with Sputnik, Dmitry Abzalov, director of the Center for Strategic Communications in Moscow, said that Russia should try to make the best of the situation and press for  concessions from Brussels.

“The EU could put Nord Stream 2 on the list of its strategic projects. A similar status for the Turkish Stream would not hurt either. If Germany and France want to work closer with Russia and will use their leverage in Ukraine, the very reason for the [anti-Russian] sanctions would be gone,” Abzalov noted.

German Chancellor Angela Merkel has shown a similar readiness to reconnect with Moscow. During their recent meeting in Moscow Merkel and Putin underscored the mutual importance of going ahead with the Nord Stream 2 project.

Interviewed by Sputnik, the director of the Russian Council for International Affairs Andrei Kortunov said that this was a distinct possibility.

“Détente between Russia and the EU is possible. There are factors that are prodding both sides towards this. The mere fact that [French President Emmanuel] Macron and Merkel visited Moscow is a very positive sign because it had been a long time since either of them had been here. The very state of international affairs calls for a rapprochement because Moscow and Brussels see eye to eye on things like the Iranian nuclear deal and the relocation of the US embassy to Jerusalem,” Kortunov said.

On Friday, the United States imposed tariffs on steel and aluminum imports from the European Union, Canada and Mexico, justifying the move by the need to safeguard America’s national security.