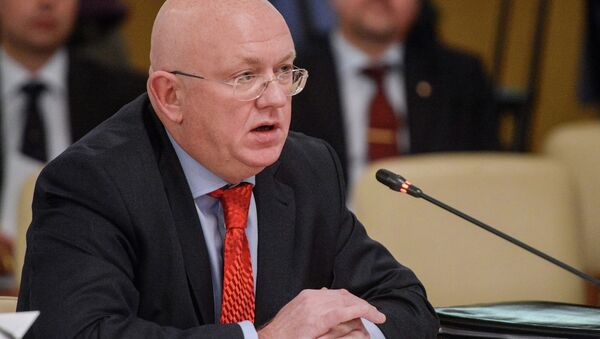 WASHINGTON (Sputnik) - Ukraine has not investigated the killing of independent and opposition journalists on its soil, Russian Envoy to the United Nations Vassily Nebenzia told the UN Security Council.

Earlier on Tuesday, the Ukrainian police said it had opened a criminal investigation into the murder of TV journalist and Russian citizen Arkady Babchenko, who was shot dead in the Ukrainian capital Kiev.

"Independent and opposition [reporters are] being killed in Ukraine, but Ukraine [is]… not investigating it," Nebenzia said on Tuesday. Nebenzia also said he assumed the Ukrainian government will accuse Russia for the Babchenko murder.

Nebenzia accused the Ukrainian authorities for the "cleansing and closing" of independent media outlets in their country.

The Russian Investigative Committee is ready to assist the Ukrainian authorities in the investigation of the murder of Russian journalist Arkady Babchenko, killed in Kiev on Tuesday, the committee spokeswoman Svetlana Petrenko said on Wednesday.

"Taking into account the fact that the Ukrainian colleagues have not managed to investigate the murders of other Russian citizens so far, we, in particular, refer to the murders of journalist Pavel Sheremet and ex-lawmaker Denis Voronenkov, the Investigative Committee is ready to assist the competent bodies of Ukraine in solving and investigating impartially Babchenko's murder," Petrenko said.

"As part of the criminal case relating to Arkady Babchenko's murder in Kiev, the Investigative Committee intends to request the legal assistance of the Ukrainian competent bodies. The Russian investigators will also carry out the necessary investigative activities on the Russian territory aimed at establishing the social circle of the victim," Petrenko added.

RIA Novosti Ukraine Journalist Arrest Part of Anti-Russia Campaign - Zakharova
The Russian ambassador noted that independent journalists have to flee Ukraine out of fear for their safety as others, "like Kirill Vyshinsky, Ukrainian citizen and the head of RIA Novosti Ukraine," have been arrested.

Nebenzia also said that "Ukraine lives in a parallel reality thanks to its authorities."

Later, Ukrainian Foreign Minister Pavel Klimkin told the UN Security Council that it is too early to tell who is responsible for the murder of Arkady Babchenko. Klimkin also claimed that Babchenko was a well-known opponent of the Russian government who was compelled to leave and has been considered as an enemy by Moscow.

On May 15, the Ukrainian Security Service (SBU) broke into the office of the RIA Novosti Ukraine in Kiev. The SBU detained Vyshinsky on charges of treason and accuses him of supporting the self-proclaimed people's republics of Donetsk and Lugansk in Ukraine's southeast. On May 17, a court in the Ukrainian city of Kherson ruled that Vyshinsky should be arrested for 60 days without bail.

Russian Journalist Killed in Kiev - Ukraine's Interior Ministry
On May 24, Ukraine announced that the Rossiya Segodnya International News Agency would be included on Ukraine’s sanctions list for three years, meaning the news agency’s assets would be blocked. The restrictions also applied to the RIA Novosti Ukraine portal, Россиясегодня.рф, Sputniknews.com, Ria.ru, Rsport.ria.ru, 1prime.ru as well as the realty.ria.ru websites.

Russian Foreign Ministry spokeswoman Maria Zakharova said that Russia is outraged over Kiev’s decision to impose sanctions against the Rossiya Segodnya International Information Agency and RIA Novosti Ukraine portal, and considers the moves to be an act of censorship.

Organization for Security and Co-operation in Europe Representative on media freedom Harlem Desir, as well as the Committee to Protect Journalists (CPJ) and Human Rights Watch said that foreign media should not be included on sanctions lists.