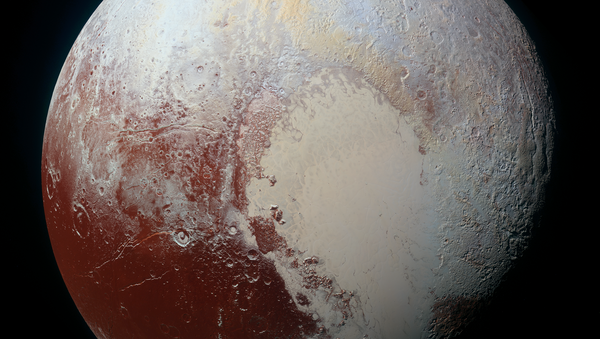 A group of astronomers has suggested that dwarf planet Pluto could be a “billion comets” stuck together.

After the NASA New Horizons spacecraft passed Pluto in July 2015, astronomers were able to collect an unprecedented amount of data about the mysterious dwarf planet. The data has led two Southwest Research Institute (SwRI) researchers to the idea that Pluto may have formed in a way somewhat different than the eight inner planets.

By comparing New Horizons data with the 2016 Rosetta comet mission, the team found that if a lot of comets similar to Comet 67P/Churyumov-Gerasimenko — visited by Rosetta — stuck together, the resulting celestial body would be rather similar in chemical composition to dark little Pluto.

In particular, they looked at the nitrogen-rich ice in a region of Pluto called Sputnik Planitia.

"We found an intriguing consistency between the estimated amount of nitrogen inside the glacier and the amount that would be expected if Pluto was formed by the agglomeration of roughly a billion comets or other Kuiper Belt objects similar in chemical composition to 67P, the comet explored by Rosetta," Christopher Glein, the lead researcher, said in a statement.

Mysterious Object Beyond Pluto Gives Clues to Existence of Planet Nine
The peer-reviewed journal Icarus published their study on May 23.

To challenge themselves, SwRI researchers tried an alternate different theory for Pluto's origins, in which it was speculated that the dwarf planet formed from very cold ices with a chemical composition more closely matching that of the sun than comets. This approach also returned some positive results.

"…the solar model also satisfies some constraints. While the research pointed to some interesting possibilities, many questions remain to be answered," the researchers noted.

Pity poor Pluto, spinning way out in the darkness: first a planet, then not a planet, then a dwarf planet and now, possibly, just a massive ball of chemical ice and rocks. It's not easy being a celestial object these days.