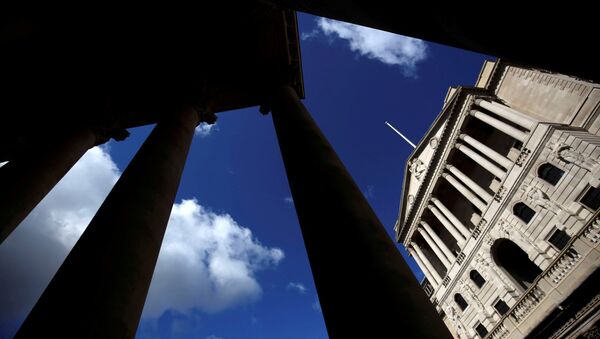 © REUTERS / Neil Hall
Subscribe
The head of Britain’s central bank has said he is not opposed to the idea of a central bank-backed cryptocurrency and touted improvements in the British economy once the ongoing Brexit negotiations come to an end.

Kristian Rouz — Governor of the Bank of England (BOE) Mark Carney says he is open to introducing a central bank-backed digital currency (CBDC). This could bolster the UK's presence in the global crypto environment, whilst making crypto transactions safer and more predictable for everyday Brits.

Russia's Rostec First Cryptophone to Be Available in Retail - Press Secretary
Speaking at a conference at Sweden's Riksbank, Carney said that the introduction of a possible BOE cryptocurrency would not happen very soon, as the central bank will have to undertake a thorough examination of the global crypto market in order to properly assess the risks associated with such a move.
Carney also said that cryptoes do not equal actual money or fiat currencies at this point, albeit they are convertible into solid cash as of now — which, the BOE governor didn't rule out — could change to the better or worse at an unpredictable moment in time.

The BOE governor also addressed a recent report from the Office for National Statistics (ONS), which showed that the UK's economy has ground to its five-year slowest in the first quarter of this year.

Carney said the slowdown could be associated with some headwind pertaining to the tumultuous Brexit process, yet, he said, only a bad Brexit deal could do significant harm to the British economy. He also said if the Brexit process turns into chaos, the central bank might consider a policy response.

"A more disorderly transition, or a materially different end state from our assumption, would have implications for monetary policy," the BOE governor noted.

Carney said in that case, the BOE could implement some monetary accommodation, either in the form of lower interest rates or bond buyout, but as of now, the BOE remains on the path of gradual tightening of monetary conditions.

"Although the exact policy response cannot be predicted in advance, observers know from our track record that, in exceptional circumstances, we are both willing to tolerate some deviation of inflation from target for a limited period of time and that there are limits to that tolerance," Carney said.

The BOE's current base borrowing costs are at 0.5 percent, whilst the UK's inflation fluctuated around 2.5 percent last month — above the BOE's target, suggesting the central bank could still remove some of the existing accommodation to curb inflationary risks.

Despite the lingering uncertainty associated with Brexit, Carney said the divorce from the EU does not pose any extraordinary challenges. This comes despite Prime Minister Theresa May saying that the UK would not remain in the bloc's customs union, suggesting that the bilateral trade across the English Channel could take a blow after the March 2019 separation.

Carney said the BOE is eyeing three increases in interest rates over the coming three years — or more if investment levels outpace the current expectations. This could happen if the UK lands several lucrative trade deals shortly after March 2019, with the main potential accord on the agenda being a deal with the US.

"From a monetary policy perspective, the Bank is ready for Brexit," Carney said. "The MPC (Monetary Policy Committee) is well-prepared for whichever path the economy takes. We have the tools we need. We will be prudent, not passive."

The BOE governor also explained the decision to keep interest rates steady earlier this month. Carney said that despite the elevated inflation permitting, the MPC sought to wait and see the Q1 GDP report, whilst also taking into account more recent developments in the broader economy, including consumer spending and manufacturing output.

Goldman Sachs-Backed Startup Launching 'Price-Stable' US Crypto Dollar
Carney said that the BOE remains optimistic, as several macro fundamentals have suggested an economic acceleration this quarter. The main problem, however, remains — the UK economy could grow faster if Britain was fully out of the EU already, and it's the ongoing Brexit process that's weighing on the GDP, rather than the fact the UK is going to separate from the bloc.

At this point, the UK is still bound by its EU obligations and is unable to negotiate sovereign trade deals — which are weighing on investment and the trade in services. Carney said he expects more surprises on the upside as the Brexit talks near their end later this year.