Secretary of State Mike Pompeo has promised that the US would soon make a decision on funding for the White Helmets, the 'civil defense' group Damascus and Moscow have accused of staging a chemical attack in April and of cooperating with extremist groups. Speaking to Sputnik, political journalism expert Piers Robinson laid out Washington's options.

Sputnik: Mr. Pompeo has stated that the fate of funding for Syria will soon be announced. Considering that President Trump froze US aid to Syria in March, what are the chances that Washington will reconsider its decision?

Piers Robinson: I think there is a good chance the decision will be reconsidered. We have a backdrop in Syria where decisions by Trump on withdrawal, allowing Assad to remain, etc. have been U-turned shortly afterward. So I wouldn't be surprised at all if there is a decision by Pompeo to essentially U-turn or reverse on that decision.

More Sanctions Under CAATSA 'In Queue' to Be Imposed Against Russia - Pompeo
At the same time, another possibility is that the US will seek, especially in relation to the White Helmets, to lower the degree of exposure the American government has in terms of supporting that group because of the negative publicity surrounding it. It's most likely that there will be a shift toward providing alternative funding through different mechanisms, perhaps even some sort of exercise to try to rebrand the White Helmets.

Sputnik: What are the primary objectives of US funding in Syria? What have they spent money on in the past, and what do you think they'll be spending money on in the future?

Piers Robinson: The US has been very much involved in providing support to militant groups (and militant extremist groups as well) in Syria. A lot of this sort of support has come from Gulf State allies, etc. But some of it is a big CIA program – Timber Sycamore- which is about supporting militant groups within Syria.

That support has been historically very extensive and has been a key part in terms of driving the conflict, and clearly has been with the objective of trying to overthrow the Assad government; it's as black and white as that, I think. 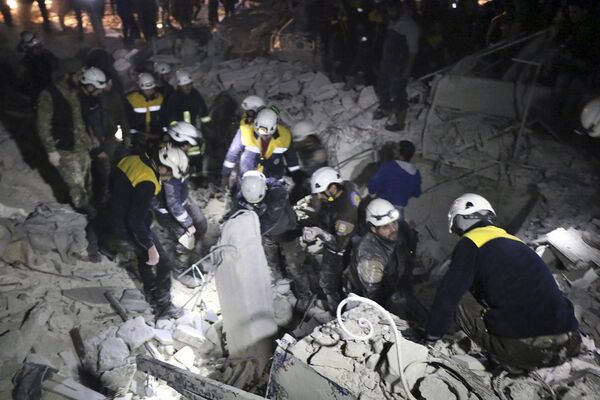 Washington Halts Financial Assistance in Northwest Syria – Reports
Sputnik: What is your assessment of the Western media's portrayal of the White Helmets, and do you think that they have lost credibility in any way recently?

Piers Robinson: It's becoming a more controversial issue. There seem to be more people who are raising questions about the White Helmets; certainly in the British context a number of mainstream media columnists have started to question the information which is supplied by the White Helmets. They are starting to be seen as an unreliable source of information.

There are other controversies at the margins about the group's relationship to militant extremist groups, and activities they've been involved with which are clearly inconsistent with an organization which claims to be humanitarian.

Sputnik: To what extent do you think the kinds of propaganda carried out by governments has been exposed? Is this happening at all in Syria?

Piers Robinson: I think the fake news debate/crisis/controversy has tended to focus in on independent or alternative media, and also on Russian activities. I think for Western publics and Western democracies the big issue, the most important fake news, as it were, relates to the question of how governments act, particularly in wartime; the deceptive information which they might circulate in order to mobilize publics for war. That's really where the problem is with fake news, and that's where we as journalists or academics should be focusing our attention.

Last Nail in Jihadi Coffin: How Syrian Army Defeated Terrorists in Damascus
Sputnik: Have you or your organization faced any backlash for your research into media coverage on Syria or other conflicts?

That was unprecedented attack on academics; I don't think there has been anything of that scale [before]. But what that tells me is that we're asking the right questions. When powerful actors start to accuse you, to smear you, to engage in ad hominem attacks and so on, that's a strong indication that you're right over the target in terms of the important questions which need to be asked.

Piers Robinson is the chair in politics, society and political journalism at the University of Sheffield. He is also the cofounder of the Working Group on Syria, Propaganda and Media, a group analyzing media coverage of the Syrian civil war which has been accused of publishing "pro-Assad disinformation" by The Times and faced other criticisms from the mainstream media. The views and opinions expressed by Dr. Robinson are those of the expert, and do not necessarily reflect those of Sputnik.