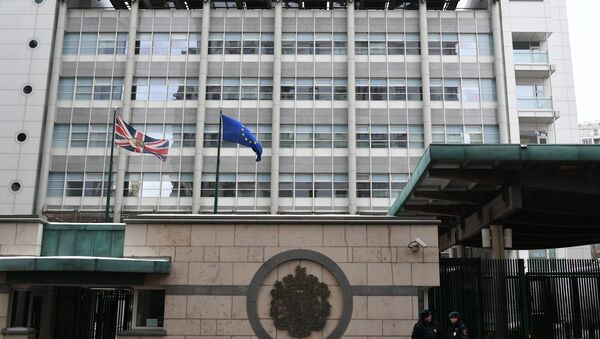 © Sputnik / Maksim Blinov
/
Go to the photo bank
Subscribe
MOSCOW (Sputnik) - The Russian Embassy in the United Kingdom said on Friday it was time for the UK side to apologize to Russia for accusations over the poisoning of Sergei and Yulia Skripal, as no evidence was provided by London to substantiate its claims of Moscow’s involvement during the three months which passed since the incident.

"Time has come for British authorities to apologize to Russia for the hollow accusations accompanied by an unprecedented anti-Russian campaign, to give answers to all the questions and requests officially sent to the British side on this matter, to engage with Russian law enforcement agencies that have opened the criminal case regarding the attempted murder of Yulia Skripal, and to stop isolating the two Russian citizens," the embassy’s press release read.

"We need to either carry out a joint objective and thorough investigation, or simply stop talking on this topic, because it does not lead to anything but a deterioration of relations," he said.

Putin also questioned the alleged fact of poisoning of ex-spy Sergei Skripal and his daughter by a military-grade nerve agent.

On May 1, UK National Security Adviser Mark Sedwill told the UK lower house defense committee that no suspects had been identified in the March's attack on the former Russian intelligence officer Sergei Skripal and his daughter in Salisbury.

Ex-Spy Skripal's Mother Asks UK on Russian TV to Let Her Talk to Son
Analysis by the Organization for the Prohibition of Chemical Weapons (OPCW) of the Salisbury incident confirmed the UK findings related to the nature of the chemical used in the poisoning, but did not include any information that would help the UK government substantiate claims about Russian involvement in the incident.

The United Kingdom and its allies have blamed Russia for an alleged role in the poisoning despite presenting no proof. Over a hundred Russian diplomats have since been expelled from these countries in solidarity with London and to put pressure on Moscow, which denies any involvement.

000000
Popular comments
They should apologize for Assange too and at their Porton down lab figure out how I can rid myself of the traces of English blood in my system.
Rokenbok
25 May 2018, 21:30 GMT1
000000
~ But then they would have to start apologizing for all their other sick-minded lies, treacheries and crimes - the whole government and military would collapse!! And then the domino-effect would sweep through the whole depraved cabal of Zio-West global traitors - from Washington to Tel-Aviv to Canberra.
The Thoth
26 May 2018, 00:10 GMT1
000000
Newsfeed
0
New firstOld first
loader
LIVE
Заголовок открываемого материала
Access to the chat has been blocked for violating the rules . You will be able to participate again through:∞. If you do not agree with the blocking, please use the feedback form
The discussion is closed. You can participate in the discussion within 24 hours after the publication of the article.
To participate in the discussion
log in or register
loader
Chats
Заголовок открываемого материала
Worldwide
InternationalEnglishEnglishMundoEspañolSpanish
Europe
DeutschlandDeutschGermanFranceFrançaisFrenchΕλλάδαΕλληνικάGreekItaliaItalianoItalianČeská republikaČeštinaCzechPolskaPolskiPolishСрбиjаСрпскиSerbianLatvijaLatviešuLatvianLietuvaLietuviųLithuanianMoldovaMoldoveneascăMoldavianБеларусьБеларускiBelarusian
Transcaucasia
ԱրմենիաՀայերենArmenianАҧсныАҧсышәалаAbkhazХуссар ИрыстонИронауОssetianსაქართველოქართულიGeorgianAzərbaycanАzərbaycancaAzerbaijani
Middle East
Sputnik عربيArabicArabicTürkiyeTürkçeTurkishSputnik ایرانPersianPersianSputnik افغانستانDariDari
Central Asia
ҚазақстанҚазақ тіліKazakhКыргызстанКыргызчаKyrgyzOʻzbekistonЎзбекчаUzbekТоҷикистонТоҷикӣTajik
East & Southeast Asia
Việt NamTiếng ViệtVietnamese日本日本語Japanese中国中文Chinese
South America
BrasilPortuguêsPortuguese
NewsfeedBreaking
00:54 GMTBiden's Reality
00:53 GMT'Bully': Trump Slams Meghan McCain for Labeling Ivanka, Jared 'Funeral Crashers' at Dad's Service
00:39 GMTElon Musk Wins Approval to Dig Citywide Vegas Tunnel System
00:00 GMTVIDEO: Former Marine Reveals How he Disarms Would-Be Robber with a Bag of ‘Gatorades and a Snack’
YesterdayManchester United Have the Talent on the Pitch, but Not on the Sideline
YesterdayAstronomers Witness Explosive Star That Could Help Develop Early Warning System
YesterdayUS Airstrike Kills Senior Al-Qaeda Leader in Northwest Syria - CENTCOM
YesterdayEmbattled Eilat-Ashkelon Gas Deal Has No Bearing on UAE-Israel Relations, Official Says
YesterdayUS to Send Three Island-Class Patrol Boats to Ukraine in November - Ambassador
YesterdayAlec Baldwin Shooting Happened Amid Union Working Conditions Protest - Reports
YesterdayWatchdog Report Alleging US Agents Abused Migrants Reveals Oversight Needed - Rights Group
YesterdayLate Actor Brandon Lee's Family Reacts to Alec Baldwin's Fatal Prop Gun Incident
YesterdayWall Street Up 3rd Straight Week as Dow, S&P500 at Record Heights Despite Volatile Session
YesterdayUS, Argentine Diplomats Discuss Regional Security, Nuclear Cooperation – State Department
YesterdayCongress Votes to Hold Steve Bannon in Contempt of Congress Furthering Partisan Divides
YesterdayDave Chapelle Says He’s Open to Meet with Netflix Employees for Dialogue
YesterdayArizona Requests Restraining Order to Stop Biden from Enforcing COVID-19 Mandates
YesterdayBiden Does Not Want to See Cross-Strait Issues Between China, Taiwan Come to Blows - Psaki
YesterdayItalian Town Considers Honorary Citizenship for Brazilian President
YesterdayUS 'Absolutely Prepared' to Sanction Persons Blocking Ceasefire in Ethiopia - State Department