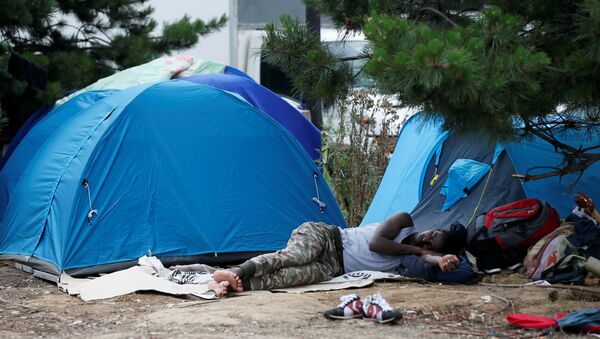 © REUTERS / Gonzalo Fuentes
Subscribe
According to reports, French Interior Minister Gerard Collomb has ordered the evacuation of 2,300 migrants from a Paris migrant camp.

Gerard Collomb stated that the police will work out an evacuation procedure soon that would "reconcile" the demands of a tough new immigration law.

"Due to the scope of camps in Paris, currently hosting over 2,300 people, and in order to treat the humanitarian challenges which are no longer bearable for Parisians, Gerard Collomb … demanded that the prefects of Paris and Ile-de-France region should develop the framework for an evacuation operation, which should be carried out as soon as possible," the French Interior Ministry's statement said.

Collomb criticized the Paris mayor's office reluctance on the issue and stressed that if the local authorities continued to defend their position, the camps might re-emerge, which would render the evacuation operation meaningless. He thereby urged them to take measures of administrative control in order to avoid repeating the situation.

"Gerard Collomb notes the refusal of the city to order an evacuation… which he regrets, and therefore asks the prefect of police to compensate for this failure in order to proceed with the operation," Collomb said as quoted in the statement.

According to the government's figures, over 30 evacuation operations have been carried out in the French capital since 2015, during which time over 28,000 people have been removed. Paris has been the most popular destination among migrants in France, receiving 40 percent of the country's asylum claims. Meanwhile, the number of migrants wishing to settle in Paris has far surpassed the reception capabilities of the city, which only has 2 percent of the county’s reception facilities at its disposal.

The problem is compounded by the different stances on migrants held by Parisian authorities and the government, which recently adopted a series of measures that toughened migration laws.

Over the past several months, migrants have been setting up camps along the city's canals, a phenomenon which has raised public concerns over safety and public hygiene. In early April, Paris Mayor Anne Hidalgo called on the authorities to provide shelter for migrants. The government, in turn, insisted that the mayor should ensure the necessary judicial procedures to evacuate the camps.

France Divided: While Some Activists Stop Migrants, Others Help Them Sneak In
Thousands of migrants are currently spread around the French capital. Paris authorities and the central government have a different stance on migrants, while Paris' Mayor Anne Hidalgo has taken steps to ensure the rights of migrants, the Interior Ministry has held operations to evacuate migrant camps. These operations have been repeatedly criticized by Hidalgo.
Newsfeed
0
New firstOld first
loader
LIVE
Заголовок открываемого материала
Access to the chat has been blocked for violating the rules . You will be able to participate again through:∞. If you do not agree with the blocking, please use the feedback form
The discussion is closed. You can participate in the discussion within 24 hours after the publication of the article.
To participate in the discussion
log in or register
loader
Chats
Заголовок открываемого материала
Worldwide
InternationalEnglishEnglishMundoEspañolSpanish
Europe
DeutschlandDeutschGermanFranceFrançaisFrenchΕλλάδαΕλληνικάGreekItaliaItalianoItalianČeská republikaČeštinaCzechPolskaPolskiPolishСрбиjаСрпскиSerbianLatvijaLatviešuLatvianLietuvaLietuviųLithuanianMoldovaMoldoveneascăMoldavianБеларусьБеларускiBelarusian
Transcaucasia
ԱրմենիաՀայերենArmenianАҧсныАҧсышәалаAbkhazХуссар ИрыстонИронауОssetianსაქართველოქართულიGeorgianAzərbaycanАzərbaycancaAzerbaijani
Middle East
Sputnik عربيArabicArabicTürkiyeTürkçeTurkishSputnik ایرانPersianPersianSputnik افغانستانDariDari
Central Asia
ҚазақстанҚазақ тіліKazakhКыргызстанКыргызчаKyrgyzOʻzbekistonЎзбекчаUzbekТоҷикистонТоҷикӣTajik
East & Southeast Asia
Việt NamTiếng ViệtVietnamese日本日本語Japanese中国中文Chinese
South America
BrasilPortuguêsPortuguese