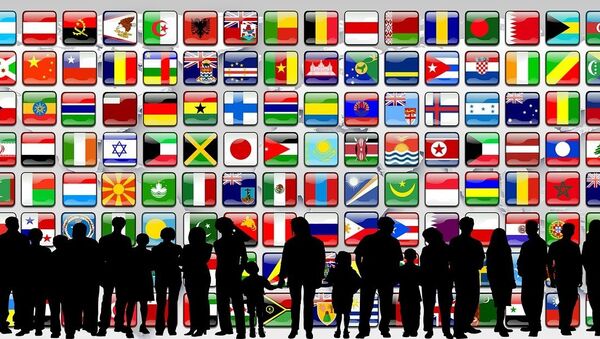 CC0 / /
Subscribe
Wednesday, May 24, is the 25th anniversary of Eritrean independence being recognized by the United Nations. Sputnik spoke to vexillologist Graham Bartram about how Eritrea came up with its flag and why some countries are resistant to change when it comes to national banners.

In 1991 an alliance of rebels overthrew the Ethiopian government of Mengistu Haile Mariam and on May 24 the Eritrean People's Liberation Front (EPLF) declared the coastal state to be independent from Ethiopia.

Two years later Eritrea's independence was formally recognized by the UN after a referendum.

Graham Bartram, chief vexillologist of the Flag Institute, said the Eritrean flag was closely based on the EPLF flag, with an olive wreath replacing the five-pointed star of the rebel movement.

This flag. These classic #GashBarka #Eritrea trees. This #Ramadan cresent moon. This perfect sunset. This month. These days ahead of #EritreaAt27. It's that time when every #Eritrean reflects on what it means to have a country, to actually belong somewhere, to have roots. pic.twitter.com/1OyatHNI8E

"That's often what you find with countries that have become independent by force. The flag they adopt is often pretty well the flag of the rebels that fought for independence. East Timor is the same and also Zimbabwe," Mr. Bartram told Sputnik.

But although there were two rebel armies in Zimbabwe — Robert Mugabe's ZANLA which represented the majority Shona tribe, and Joshua Nkomo's ZIPRA, which drew its support from the Ndebele — it was ZANLA's flag which formed the basis for the Zimbabwean flag.

There are a lot of good #Zimbabwe stories that we are not shouting about. We have the likes of @Axciljefferies who has flown the flag high constantly on international #Motorsport circuit. Thank you man. You are making us so proud to be #Zimbo. Salute!!!#RT for @Axciljefferies pic.twitter.com/bgFl2aOIE4

Historical events have led to many of the world's flags changing over the years.

After the fall of the Nazi regime, the hated swastika flag was dumped and Germany went back to the black, red and yellow banner which had represented the Weimar Republic before Hitler's rise to power.

The current German flag of black, red, and gold started out as a symbol of the liberal revolutions of 1848. Versions of it were also used for Communist East Germany as well as the horrendous Weimar Republic. pic.twitter.com/EaddFdEyGh

When the Soviet Union collapsed in eastern Europe in the early 1990s the red banner with the hammer and sickle in one corner was quickly dispatched.

"Latvia, Estonia and Lithuania went back to their old flags. So did the Ukraine. And Georgia, although they later changed their flag. Places like Kazakhstan and Uzbekistan had not really existed before, so they had to come up with their own flags. Some of them are quite pretty," Mr. Bartram told Sputnik.

"The white, blue and red of the Russian flag has been in use since the 17th century and it was used right up until 1917. It's not unusual that they went back to it," said Mr. Bartram.

Is it easy to design a new flag? Here we see some ideas suggested one century ago for the Soviet flag. pic.twitter.com/9QzEcengae

"From a vexillologist's point of view there is no such thing as a bad flag. The people whose flag it is often think it's a good flag even if, to the western aesthetic, it's quite awful. If it's a national flag then it's important to the people of that nation," Mr. Bartram told Sputnik.

Democracy Is Enemy Of Change For Flags

He said people in democratic countries were quite resistant to changing their flags.

A case in point is New Zealand, which has had the union flag in the top corner since the days when it was part of the British Empire.

In 2014 the then Prime Minister, John Key, proposed a two-stage referendum on changing the flag, which is extremely similar to that of Australia.

In November 2015 voters selected a black, white and blue design featuring a silver fern and four stars from among five shortlisted options for a new flag.

But in March 2016 nearly 57 percent of the electorate voted to retain the old flag.

"What this demonstrates is how difficult it is to change a flag. There is incredible inertia when it comes to changing a flag. In autocratic countries you get presidents changing the flag but in countries with democracy they have referendums and most people consider that flag is the one they were born under and it's bloody well going to be the one they die under," Mr. Bartram told Sputnik.

Come on @cathmckenna you can’t keep doing this if you want to shed your #ClimateBarbie title.

That’s not the Manitoba Flag (you’re a Canadian Minister right?)

"Veterans also say their buddies died fighting for that flag and there's all sorts of emotional tie-ins," he told Sputnik.

Canada did however change its flag, in 1965, but only after a long and divisive debate.

The Story Of Bingu's Flag

In 2010 Malawi's President Bingu decided to change the country's flag because he thought it looked as if the "sun was setting on Malawi", said Mr. Bartram.

Bingu died of a heart attack in 2012, aged 78, and the new President, Joyce Banda, decided to return to the original flag.

After overthrowing Colonel Muammar Gaddafi in 2011 Libyans also dispensed with the all-green flag which the dictator had invented and went back to a standard which had been around under King Idris.

Mr. Bartram said flags are emotive subjects and they were actually becoming more important now than ever before.

Indian soldiers holding a Nazi flag which they had captured at Libyan Omar, December 1941.
From the British Archives pic.twitter.com/yAU8ElISzR

In England county flags began in Cornwall in the 1970s and spread to Devon and Dorset. Now there are only three English counties which don't have their own flags.

"As the world becomes more homogenous it becomes more important for people to have their own local identity. They want something to be theirs. You can think of Dorset as yours or your town. So having a county identity has become more important because of globalization," Mr. Bartram told Sputnik.

The flag of #Dorset flying in Indiana, USA for #CountyFlagsDay! 💛 pic.twitter.com/QMjTMtXvSh

As for the future, he does not believe there will be many changes to flags.

"Brexit won't change any flags. Britain can still fly the blue flag with the 12 yellow stars on it outside embassies and government buildings. Many people think that's the European Union flag but it's not. It's the flag of the Council of Europe and Britain will remain in the Council of Europe after Brexit," Mr. Bartram told Sputnik.