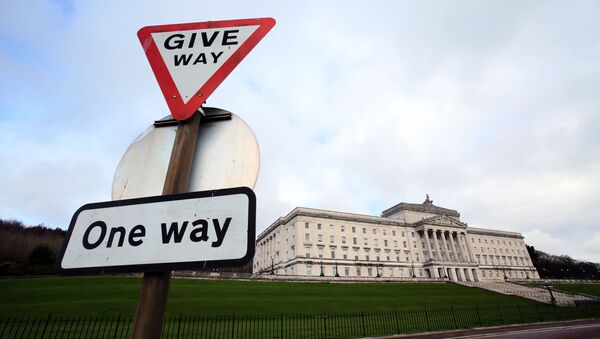 © AFP 2021 / Paul FAITH
Subscribe
Britain’s Northern Ireland Affairs Committee has called for Northern Ireland Secretary Karen Bradley to increase her efforts to get the Stormont executive back up and running.

Northern Ireland has been run by civil servants since the power-sharing executive made up of the DUP and Sinn Fein collapsed in January last year. The then deputy first minister Martin McGuinness pulled Sinn Fein out of the coalition after a bitter split between the governing parties. The committee says that the stalemate in talks has gone on long enough and says restoring the executive is a top priority.

Sputnik spoke to Liam Kennedy, Professor of economics, social history and politics at Queens University Belfast for more insight into the issue.

Sputnik: What do you make of the Northern Ireland Affairs committee urging talks to resume and call them a priority?

Liam Kennedy:  in a sense it appears who you ask, I mean it is fair to say, people aren’t demonstrating in the streets saying we want our regional parliament back, there isn’t a bad feeling here and there hasn’t been over the last year and a half.

None the less if you look more closely at things, major health reforms are on hold, a big decision on an incinerator which would handle much of the waste of Northern Ireland on hold and there are a whole series of intermediate level decisions that should have been taken. So Northern Ireland is suffering because of the lack of leadership lack of decision making assembly in Northern Ireland

Sputnik: How decisive was the decision by the judge to say that civil servants didn’t have authority to approve things in place of ministers, and will that add any increased pressure to talks?

Liam Kennedy: That ruling finding that the civil servants couldn’t make some of the major decisions we are waiting for. I meant there a major reform to the health service here that is creaking that was agreed over a year ago.

Those can’t be implemented and there are other examples like that, they can’t be implemented until there is a Stormont based minister, power-sharing minister able to sign off on those reforms. I think the court ruling effectively meant that, alright civil servants can do the day to day running routine decision making, but they can’t make the big decisions. This puts the ball right back in the politicians court.

Sputnik: Has anything changed with regards to the talks between Sinn Fein and the DUP regarding their differences?

Liam Kennedy: There are no indications at the moment that either Sinn Fein or the Democratic Unionist Party are moving closer to some form of agreement, they did a few months ago.

An Irish Language Act is the major stumbling block at this stage, there is also the issue of same-sex marriage. But it is a sense of symbolic issue of an Irish Language Act which seems to create the deepest visions in society here, but the truth is its symbolic values are hugely important.

The views expressed in this article are those of Liam Kennedy and do not necessarily reflect the official position of Sputnik.