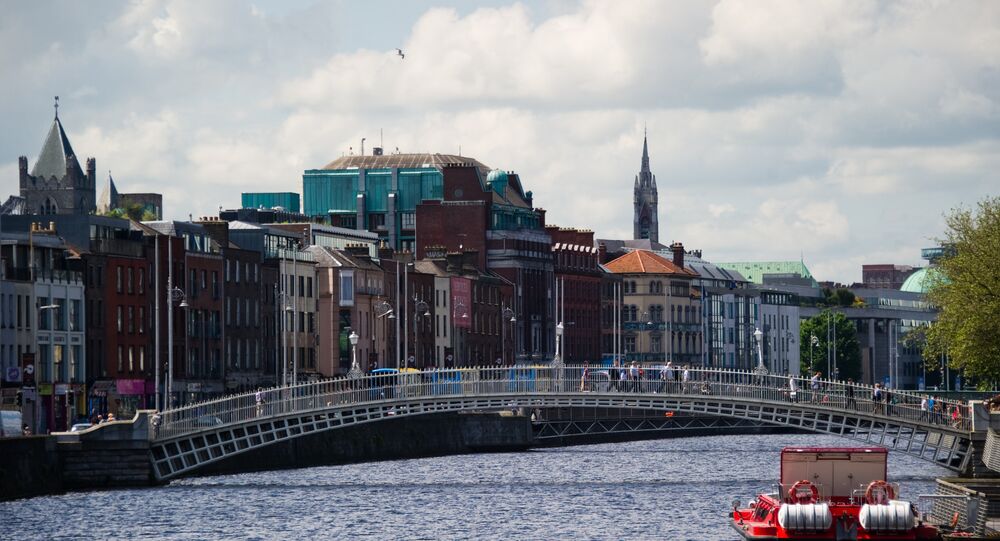 Britain's dirty war in Ireland, waged throughout the course of the Troubles – the thirty year conflict from the late 1960s through to the late 1990s in the six partitioned counties of Ireland which remain under London rule, officially known as Northern Ireland – marked an especial low point in the country's sordid colonial history.

It is a history that has come back into sharp focus with the explosive revelations contained in declassified state documents from the 1980s, made public by the Government of the Irish Republic.

Said papers confirm that in 1987 the Ulster Volunteer Force (UVF), one of the oldest and most notorious of the various loyalist/Protestant paramilitary organizations that were engaged in sectarian violence in the province during the Troubles, wrote to the then Irish Prime Minister Charles Haughey in Dublin, informing him that in 1985 they were approached by Britain's domestic intelligence service, MI5, with a request to assassinate him.

© AP Photo / Markus Schreiber
'Specter of Collusion': MI5 and Police Knew UK MP Was Pedophile, But Kept Quiet
We learn that in the letter the UVF told Mr Haughey, "In 1985 we were approached by a MI5 officer attached to the NIO (Northern Ireland Office) and based in Lisburn, Alex Jones was his supposed name. He asked us to execute you." The letter subsequently goes on to allege that Britain's MI5 supplied the group with information such as pictures of Haughey's home, his private yacht, and details of the vehicles he travelled in.

The UVF refused follow through on MI5's request, telling Mr Haughey, "We have no love for you but we are not going to carry out work for the Dirty Tricks Department of the British."

Charles Haughey, it should be pointed out, was head of the Irish government as leader of the country's Fianna Fail (the Republican Party). He was a strong supporter of a united Ireland and as such enjoyed a testy relationship with his UK counterpart, Margaret Thatcher, who took a notoriously hard-line stance against Irish republicanism, most infamously with her refusal to countenance any compromise during the 1981 hunger strike by republican prisoners in the Maze Prison just outside Belfast.

Despite entreaties from political and religious leaders from across the world, Thatcher allowed ten of the men on hunger strike to die over the removal of their political status by the previous UK Labour government in 1976.

© AFP 2020 / STF / CONSOLIDATED NEWS PICTURES
Files Show Cutting Jab From Fmr UK Amb to US on Nixon Requests to Meet Thatcher
As with the Provisional Irish Republican Army (IRA), whose war against British rule in the partitioned six counties of Ireland was launched after decades of structural discrimination suffered by Catholics when it came to housing, employment, education and political representation, the UVF viewed themselves as being engaged in a legitimate struggle; determined, along with the wider unionist Protestant community, to remain under British rule and quash with violence the Irish republican movement.

This was an objective they shared with the British political establishment, illustrated in the deployment of a considerable number of British troops and security personnel to the province to combat the IRA and other splinter republican paramilitary organizations.

Of the various loyalist terrorist groups that were active in the conflict, the UVF is known to have been responsible for 500 murders. However lest anyone make the mistake of romanticizing the group or its paramilitary violence, much of their time was spent engaged in criminality, specifically with regard to the drugs trade in Protestant communities, in which the group is known to have been a major player.

On the issue of collusion between British state security and intelligence services and loyalist terror groups, this has long been an open secret. Among the most grievous cases where such collusion is alleged involved the murder of two high profile lawyers in the province who were known to have had republication sympathies, Rosemary Nelson and Pat Finucane.

Campaigners have fought a long battle to force the British government to admit there was state collusion in their murders but thus far without success.

Interestingly, in the declassified UVF letter the group claims that 17 of its victims were killed with the aid of information supplied by British intelligence. They also claim that MI5 planned to damage the Ireland's agricultural economy with the introduction of livestock diseases such as Foot and Mouth, Swine Fever, and Fowl Pest.

© AP Photo / Peter Morrison
Theresa May Pledges 'Specific Solution' to Northern Ireland Border Row
For those who have studied Britain's colonial history in any depth, its brutality in the face of national liberation movements, this story will not come as any surprise. The fact it involves on this occasion a plan to have the prime minister of a sovereign state murdered does, however, expose as a sham the oft-repeated claims of the British political establishment that London stands as a pillar of democracy, human rights, and international law. In truth the British State is dripping the blood of men, women, and children from Ireland to Iraq, Libya to Malaya, and many more places in between.

For example, in his history of the British Empire, ‘The Blood Never Dried', John Newsinger reminds us that in India, during the Empire, Britain "threw aside the mask of civilization and engaged in a war of such ferocity that a reasonable parallel can be seen in our times with the Nazi occupation of Europe."

Ireland occupies a unique place in Britain's colonial history in that it was the country's first colony and remains one of its last — at least, that is, those six partitioned counties in the north of the island. The Republic of Ireland, made up of the remaining 26 counties of the island which lies of Britain's west coast, were liberated after Irish rebels waged an effective insurgency between 1919 and 1921, which forced the British government to the negotiating table in London.

The catalyst for Ireland's War of Independence was the 1916 Easter Rising in Dublin, which was quashed by overwhelming military force after six days. One of the leaders of the rising, executed by the British afterwards, was James Connolly. Years before Northern Ireland came into being as a result of the aforementioned negotiations in London, Connolly predicted that partition would lead to a "carnival of reaction."

British collusion with loyalist terror gangs in murder and mayhem over a half a century later proved him right.