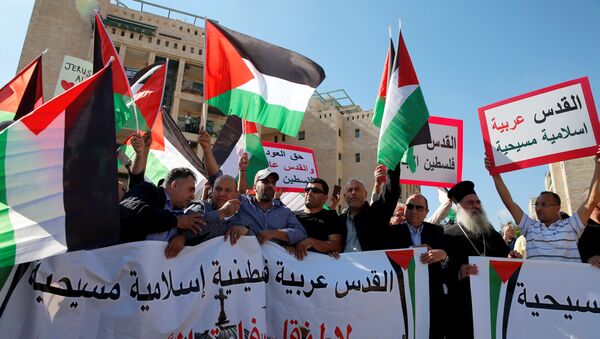 Donald Trump’s long-delayed Middle East peace plan threatens to further alienate the Palestinians who see it as yet another giveaway to Israel.

Israel’s daily newspaper Haaretz has quoted five US officials and a congressional aide as saying that the administration plans to release the roadmap, drawn up by Trump's son-in-law and senior adviser Jared Kushner and Trump's special envoy for international negotiations Jason Greenblatt, sometime next month.

The chances of Palestinians taking interest  in the peace proposal appears dim, however, especially in wake of the mass protests earlier this week over Monday’s opening of the US embassy in Jerusalem, the newspaper wrote.

Palestine Doubtful About US Future Mideast Peace Plan Likely Favoring Israel
The Trump administration's unreserved defense of Israeli Prime Minister Benjamin Netanyahu's policies have alienated and angered the Palestinian leaders who accuse the White House of giving up its role as a neutral arbiter in the conflict.

Washington’s allies in Europe and the Persian Gulf have been equally critical of the United States’ unconditional support for the Jewish state.

The chief Palestinian negotiator, Saeb Erekat, insists that any peace deal needs to be between the Palestinians and Israel — not the United States.

The Palestinians’ anguish may worsen even further this summer as millions of dollars in US assistance to them, on hold since last year may not be forthcoming, according to the report.

Of $251 million in US assistance earmarked for the Palestinians in 2018, only $50.5 million has reportedly been sent with the remaining over $200 million currently on hold pending approval.

For several months the White House has failed to respond to State Department and USAID recommendations to spend at least some of this money and there is no sign that these recommendations will be acted upon any time soon.

Since Donald Trump recognized Jerusalem as the capital of Israel and initiated the relocation of the US Embassy to the city, Palestinian Authority President Mahmoud Abbas has said that the Palestinians will not accept any peace plan proposed by Washington.

However, Abbas reportedly told the Fatah Central Committee on Monday that the Palestinians would listen to the Trump administration’s ideas to resolve the conflict, if it were to endorse the two-state solution and recognize East Jerusalem as the capital of the “State of Palestine,” The Jerusalem Post wrote.

The past weeks have seen a series of violent clashes on the Israeli-Gaza border between Israeli security forces and Palestinian protesters demanding the return of Palestinian refugees and their descendants to their former homes in Israel.

More than 60 Palestinians have been killed and thousands have been injured in the violence.