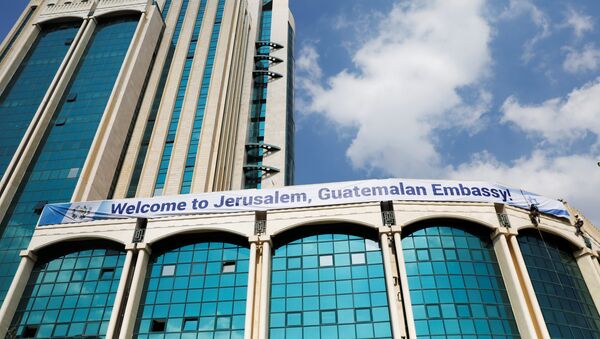 JERUSALEM (Sputnik) – Guatemala’s Embassy in Israel officially opened in Jerusalem after relocation of its operations from Tel Aviv, a Sputnik correspondent reported Wednesday.

On Monday, the US Embassy was opened in Jerusalem.

READ MORE: Guatemala May Isolate Itself With Jerusalem Embassy Move

Earlier it was reported that Guatemalan President Jimmy Morales arrived in Israel amid violent protests in the Gaza Strip triggered by the opening of the US Embassy in Jerusalem.

Over 60 people, including several children, were killed and more than 2,700 others were injured in clashes between the Palestinians and Israeli forces.

Israel considers Jerusalem as its capital, including the eastern districts of the city, which the Israelis seized from Jordan during the Six-Day War in 1967. The international community does not recognize the annexation of East Jerusalem and believes that the status of the city should be determined based on an agreement with the Palestinians, which claim the eastern part of Jerusalem.