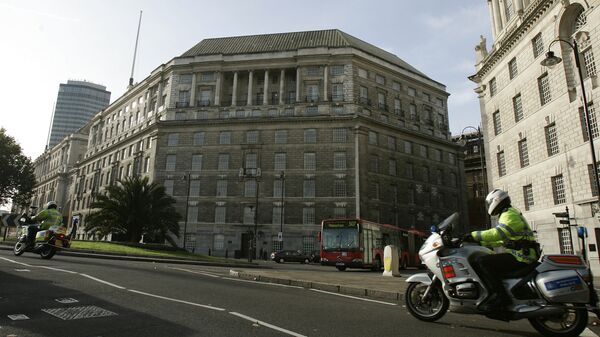 Sputnik: In your view, how justified are these claims by the MI5 chief?

David Icke: It's becoming embarrassing for England. A classic manipulation technique used through the ages is to accuse your opponent of what you're doing.

For the terms 'bare-faced lying' and 'ridicule of critics' to come from the mouth of the director-general of MI5 is extraordinary. The guy is in desperate need of a mirror.

UK Created Skripal Scandal as Distraction From Plans to Leave EU - Historian
You know, as I've observed this, and the public response to this, not least in Britain, it's clear that the authorities have found themselves living in a time warp in this sense: They, for infinitum, have basically been able to say anything about what happens, and vast numbers of people would believe them, because the authorities say it. That response we still have with the mainstream media, but what they've lost the plot on is the [fact that the] general public are not buying it anymore.

[the public is] asking, increasingly, because they're becoming more streetwise about this, two key questions whenever this nonsense is communicated. One: Who benefits? Who benefits from me believing what the authorities are telling me to believe? Well, in this case, clearly, it benefits anyone that wants to demonize Russia. The demonization of Russia is a much bigger global campaign for much bigger geopolitical reasons.

Question number two is: Where is your evidence?  Clearly Parker is still working on the idea that you keep repeating the lie, and people will believe it. And the more you repeat the lie, the more the lie becomes a gimme, with no evidence necessary. But more and more people are asking 'where is the evidence?' And the more they lie about the Salisbury case, the more they lie about fake 'Assad chemical attacks' in Syria, the more cynical and questioning the public are becoming.

So this is really counterproductive. I've just been on a speaking tour all over England, and people are absolutely seeing through this now in greater numbers than ever before.

Sputnik: You would think that the government would be looking for as much support as it can get in this very challenging time of negotiations to get out of the European Union. What's your take on that?

David Icke: There's a much bigger global geopolitical agenda going on here, which goes back to the Project for a New American Century and its list for regime change in the Middle East from September 2000.

MI5 Chief Seeks Boosted Intel Sharing With EU Post-Brexit Amid "Russian Threat"
[Also] part of this geopolitical picture is the demonization of Russia; that's why there is this massive NATO buildup on the borders of Russia. And before you can justify a conflict with a country, you have to psychologically prepare people by demonizing that country. We've seen that again and again and again in the Middle East – demonize Saddam Hussein and invade (on a lie by the way), demonize Gaddafi, demonize Assad and then invade or get your proxy armies to invade.

The views and opinions expressed by David Icke are those of the speaker and do not necessarily reflect those of Sputnik.