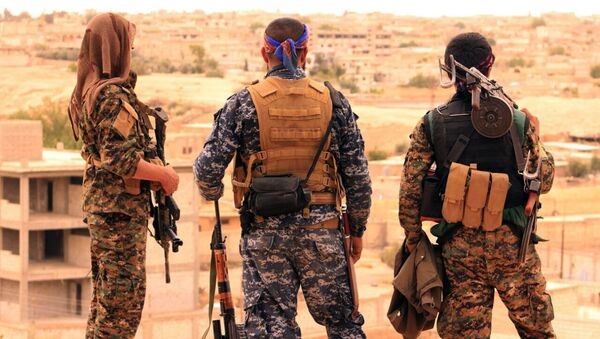 “Syrian Democratic Forces returned fire at an unidentified aggressor near Dayr Az Zawr, Syria at approximately noon local time May 10. The hostile force engaged SDF with artillery, and SDF responded in self-defense, resulting in the destruction of one artillery piece,” the release said.

Coalition officials discussed the incident with their Russian counterparts through the ground and air deconfliction communication lines, the release said.

No casualties occurred on either side during the incident, the release added.

US Establishes New Military Base in Syria's Oil-Rich Deir ez-Zor - Reports
US and Russian forces operate on the opposite sides of the Euphrates River in the city of Deir Ez-Zor. The two sides communicate regularly through deconfliction channels in a bid to avoid any mishaps between their forces.

On February 7, the US-led coalition said it carried out defensive airstrikes against pro-government forces in Syria that had attacked the headquarters of the US-backed Syrian Democratic Forces (SDF) east of the Euphrates River.