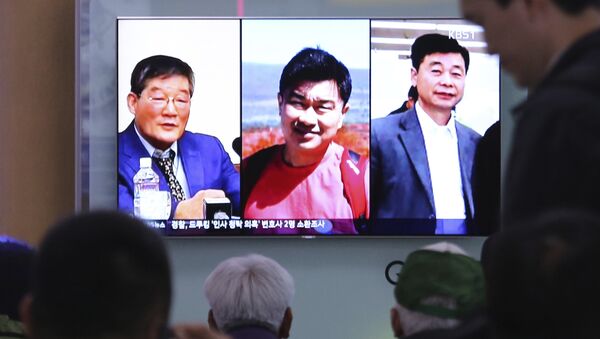 The three Americans recently released from North Korea issued a statement on Wednesday thanking the US government, US President Donald Trump and US Secretary of State Mike Pompeo for "bringing us home."

"We would like to express our deep appreciation to the United States government, President Trump, Secretary Pompeo, and the people of the United States for bringing us home," the statement, released by the US State Department, reads. "We thank God and all our families and friends who prayed for us and for our return."

"God Bless America, the greatest nation in the world," it concluded.

According to media reports, the three men have since arrived in Alaska.

Trump took to Twitter early Wednesday saying he was "pleased" to announce that the three Americans were on their way back to the states.

As Sputnik previously reported, detainees Kim Hak-song and Kim Sang Duk (also known as Tony Kim) were arrested in 2017 following accusations of "hostile actions." Kim Dong-chul, a pastor born in South Korea, was detained in 2015 on charges of espionage.

The release of the Americans comes ahead of an anticipated spring meeting between Trump and North Korean leader Kim Jong Un.