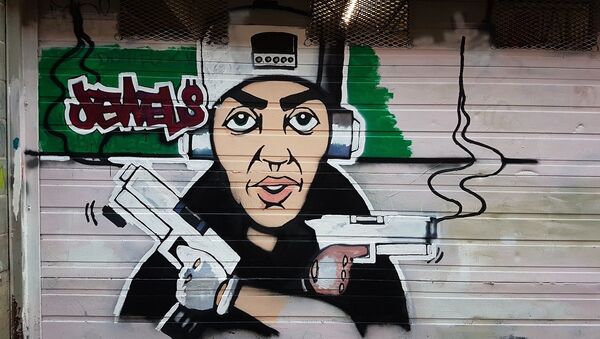 A witness whose identity cannot be revealed has been giving evidence from behind screens at the trial of an alleged gunman accused of killing two people in London. The trial has also heard from a firearms expert who said gunshot residue linking him to the crime could have been "contaminated."

Obina Ezeoke, 25, denies murdering Annie Ekofo, 53, and her nephew Bervil in their apartment in East Finchley, North London in September 2016.

The trial at the Old Bailey in London has heard the pair were innocent victims of mistaken identity and the real target was Mrs. Ekofo's son, Ryan Efey, who was involved in a long-running feud with Ezeoke and his friends.

Ezeoke has admitted he had rented the getaway car, a black Vauxhall Meriva, from the witness on previous occasions but denied he was in it on the night of the murder.

Latest: man denies murdering mother-of-nine and her nephew who were shot dead in #EastFinchley. Obina Ezeoke, 24, to stand trial in March pic.twitter.com/WyxVec1OJc

Gunman Slipped in Through Unlocked Door

Mrs. Ekofo and her nephew were shot dead around 6:25 a.m. on September 15, 2016 by a gunman who slipped into the apartment after a member of the family left the front door unlocked when he went to work at 4:40 a.m.

Four other people in the apartment, including a young child, were unharmed.

Mrs. Ekofo came to the UK from the Democratic Republic of Congo — then known as Zaire — in 1991.

On Tuesday May 1 the witness — who came to the UK from Africa on a forged passport and later claimed asylum — denied he had ever owned the Meriva.

But Ezeoke's barrister, James Scobie QC, claimed the witness "held the key" to the entire case.

"By Ezeoke naming you, you are now in a very difficult position I suggest because you know who you rented that car out to on the night of 14/15 September don't you?" Asked Mr. Scobie.

"I don't drive a car. I don't have a driving license. I don't rent cars. I don't have anything to do with it," said the witness, who cannot be identified for legal reasons.

Witness Has Been Branded a 'Snitch'

"My last suggestion to you is this — you are in fear aren't you of being named by Ezeoke. That's right isn't it?" Asked Mr. Scobie.

"Yes I'm afraid because I don't know why he wants to get me included in this," replied the witness.

"(After the police called on you) you began receiving calls from withheld numbers didn't you? One of the callers said you were a snitch?"

A secret witness has just been giving evidence at the trial of Obina Ezeoke, accused of murdering Annie Ekofo and her nephew Bervil in East Finchley in 2016. The man denied he had rented out the getaway car to another man on the night of the murder. Ezeoke denies murder….

I am forbidden from identifying the witness by a court order although the jury and the defendant knows his name.

The jury was shown bodycam footage showing heavily armed officers and a specially trained dog searching Ezeoke's apartment in Bethnal Green, where several items of clothing were found which had traces of gunshot residue.

"What are the concerns of experts like you about possible contamination after a search like this?" Mr. Scobie asked.

"We know that the officers themselves and their equipment is contaminated with gunshot residue," replied miss Shaw.

"It's not their fault, it's the business they're in but these particles are invisible to the naked eye, is that right?" Mr. Scobie asked.

Mr. Scobie also asked Miss Shaw about the gunshot residue (GSR) which was found in the Meriva.

She said 76 samples of Type 2 GSR were found on the driver's side and 48 on the passenger side as well as more in the rear.

Miss Shaw said it was "too much gunshot residue" to have come from the Ekofo murders alone, even if the killers had been a three-man team.

She said it was more likely that a recently fired gun had been used by occupants of the car on other occasions.

The jury has heard Mrs. Ekofo was shot dead after she got out of bed upon hearing the shots that killed her nephew, who had been staying at the apartment by chance and was probably mistaken for the intended victim in the dark.

Prosecutor Mark Heywood QC has claimed Ezeoke went to the apartment to shoot Ryan Efey after a long-running dispute on the notorious Grahame Park estate in Barnet.

"He went there quite deliberately, with a gun and of course sufficient ammunition to use it, to attack and kill one of the young men of the family. That was part of what you will hear was a vendetta of violence — tit for tat violence," he told the jury at the start of the trial last month.

"The killer's hate was such that he did not falter when confronted by a second person, he simply took her life as well," said Mr. Heywood.

This is the second time Ezeoke has gone on trial. His first trial collapsed last year after the judge, Stephen Kramer, was forced to retire due to a back injury.

The trial is underway and a verdict is expected next week.