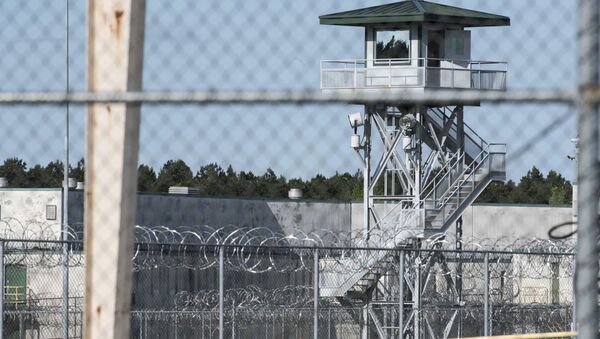 South Carolina inmates have had enough of their continued poor treatment at the hands prison staff and the South Carolina Department of Corrections (SCDC) following an uprising at Lee Correctional Institution and are now planning a coordinated prison strike with inmates in five different states across the country in response.

Since the April 15 uprising at Lee Correctional Institution in South Carolina, during which three housing units erupted into total chaos, creating what prison officials called a "mass casualty incident," problems stemming from the state's penal system have not abated. Seven inmates were killed and more than 20 were injured on that day, making the event the most violent in a US prison in a quarter of a century.

South Carolina governor Henry McMaster told reporters after the April 15 uprising that "people in this prison have very violent records and we cannot expect them to give up their violent ways when they go to prison."

SCDC Director Bryan Stirling said at a press conference following the chaos there that "these folks are fighting over real money and real territory while they're incarcerated," but an inmate who spoke with Sputnik News anonymously refutes that narrative, suggesting instead that poor living conditions and abuse by corrections officers are what led the prison to reach a boiling point one April 15.

In particular, inmates are trying to stand against what they call "gladiator matches," wherein prison guards pit rival inmates against each other in a locked room. Sputnik's source inside the prison said that the April 15 violence was one such "gladiator match" that turned into a ‘mass casualty incident' after guards waited on the other side of a fence and "watched the bodies pile up."

The inmate at Lee Correctional is helping plan the August 21 nationwide prison work stoppage spoke with Sputnik News anonymously. August 21 is the anniversary of the day that the Black Panther Party leader George Jackson was assassinated by prison guards in San Quentin prison in 1971.

Lee County now has what's called a "controlled movement prison yard," but it wasn't always that way, he told Sputnik. In the late 1990s, "they began to wrap fences around each dorm so your movement became very restricted," he said. As prison officials started chipping away at inmates' privileges, such as recreation time, they also "began a pattern called collective punishment," he said. "When a fight occurs inside the unit, then that means the entire until will be locked down for a couple of days; things of that nature. Officers' attitudes became more aggressive as time began to pass."

The inmate said that "at Lee in particular, it was an atmosphere where you could tell any moment that something would jump off. Every now and then you'd have a hostage situation; the guards might get taken hostage. They have officers getting into fights with prisoners; They have prisoners getting into fights with weapons and you can see this getting worse and worse." He said that such incidents always received the same response: more "restrictions" on inmates.

Lee Correctional has "privileged units" for inmates that behave favorably to the SCDC. Inmates in those units receive greater freedoms and privileges, but those units "only hold maybe 10 percent of the prison population," the prisoner said. Elsewhere in the prison, men of all ages, accused of petty or deadly offenses, are grouped together, and when their good behavior goes unrewarded, "you notice the start of a buildup in the population and the hopelessness," he told Sputnik News.

Lee Correctional is the largest prison in South Carolina and has long had a reputation as one of the most deadly. Between 2008 and 2012, the prison saw three hostage situations and four brawls. Two inmate uprisings took over some units between April 2012 and February 2013. According to SCDC data, assaults in the state's prisons have skyrocketed by 68 percent since 2013. While there was only one inmate homicide in the state in 2013, 2016 saw five and 2017 saw 12. Twenty inmates have been killed in the past 16 months in the state.

The inmate suggested that the conditions exhibited at Lee Correctional are endemic to every other prison in the state and the United States at large. "This was across the state and across the nation, and what I mean by that is, since 1996 a lot of bills have been passed, like this ‘get tough on crime' attitude and these type of attitudes exacerbated once again the problems in the nation because they want to be tough on prisons and they began to expand the prison-industrial slave complex," he told Sputnik News.

"It became a big monster inside this country and all you have now is a lot of buildings that are warehousing a lot of prisoners with no programs, no activities, no real training, no nothing. And they're just walking around like they're in zombieland," he said.

One of the most persistent complaints made by incarcerated people in South Carolina is about climate punishment. Prison guards have been repeatedly accused of blocking windows with metal bars, sometimes to block light, other times to create extreme temperatures, at multiple institutions in the state. Such fixtures were installed after the October 2017 uprising at McCormick Correctional Institution, which left three prisoners injured, according to Jared Ware, a reporter focusing on prisons who spoke with inmates at the institution after the event. That prison had seen a jail guard get busted for smuggling offenses just months prior.

Some prisons in the state are currently being outfitted with 50-foot security nets to prevent contraband from being thrown over the walls.

This year, prisoners in South Carolina have had to confront state militias looking for contraband and inmates have reported abuses such as secret beatings by masked guards, according to "prison slavery 276," a Twitter account run by inmates in the state with the group Jailhouse Lawyers Speak.

Meanwhile, separate from the prison strike movement, a handwritten lawsuit filed in February emerged onto public consciousness Thursday. In it, inmates housed in a statewide protective unit at South Carolina's Broad River Correctional Institution claim that they're forced to live in horrid conditions, with urine and feces on the floor. They also claim harassment, denial of access to mental health treatment and guards forcing them into sexual favors.

One video from inside Lee Correctional posted by the Facebook page Freedom Fighters Upstate SC on April 23 features an inmate complaining about feces and urine as well as trash cluttering the hallway. South Carolina activist Traci Fant of Freedom Fighters Upstate SC told WBTW News 13 that, since the uprising, inmates at Lee Correctional Institution "can't urinate or defecate in the toilet because they have to drink the toilet water."

​Wednesday, 14 SCDC employees, including 11 corrections officers, were arrested by the FBI. They're accused of smuggling contraband and accepting bribes. The FBI has been looking into prisons to crack down on crooked guards in the state since 2016.

Despite the restrictions placed on prisoners across the state following the uptick in violent events, inmates are still forced to work. Since 2001, prison jobs that used to pay up to $4.80 an hour have disappeared as the state no longer pays inmates for their labor unless it's for a state-owned business. Now, most jobs in South Carolina prisons don't pay a wage at all. Inmates at Lee Correctional are manufacturing packaging socks, hosiery, lingerie and underwear, pillows, mattresses and more. Many of the buildings in the facility were constructed by inmates as well.

After somebody tried to smuggle contraband into the prison with a drone in 2014, state officials had two guard towers constructed at a cost of $237,000, and inmate labor was used in some of the construction. A $2.2 million camera system with night vision and thermal imaging that reportedly covers every area of the prison was also purchased and installed.

The inmate acknowledges that the issues he's raising do not typically reach the general public, who are instead told that prisons with issues such as Lee's face these problems because of understaffing. He stressed that more programs and training, not more guards, are what will bring tensions down.

"You have to understand something," the inmate told Sputnik News. "The prison resistance movement has been around forever, since — I always like to say — since the Africans came off the slave boats here, the prison resistance movement has been around. It only solidified with the 13th Amendment of the United States Constitution," which abolished slavery but sanctioned the use of forced prison labor. "So there has been a fighting element in the prisons ever since then. There's been strikes and boycotts," he said.

"We all consider it part of a budding movement that's continuing on until — in my viewpoint, we're looking for abolition at the end of the day," the inmate said.

He said that organizers have studied the history of prison resistance movements and "what we know is that we have to figure out how to economically impact the system." Boycotting purchases in the prison — phone calls, food from the canteen, etc — in addition to the work stoppage "is more than enough and sufficient to make a serious statement," he said.

Inmates in five states are already on board with the strike, the inmate told Sputnik News, but the message is spreading. However, he declined to identify the institutions or states that are part of the organizing, as leaders of prison strikes in the United States are typically punished for their roles.

"We feel like it's the next right step to take, the next right step to get prisons… [to] stop spending, stop letting these people exploit our families, our friends and even ourselves. Stop exploiting us because our money, our family, is what keeps the system going," he said. "It's all based on dollars, everything at the end of the day is based on money. I wish I could say it was based on restorative justice but it's not, it's based on money."

The national demands are to serve as a guideline of sorts; other prisons will have other demands and perhaps other tactics, as "everybody can't strike the same way," the inmate at Lee Correctional said. Their demands include an improvement in living conditions; parole incentives for ‘lifers;' an end to "racist gang enhancement [sentencing] laws targeting black and brown humans;" an end to more extreme sentencing for offenders whose victims are white; student loan grants for inmates; the right to vote; an end to prison slavery and an increase in rehabilitative services, according to an April 24 press release.

The press release outlined the strategy of the strike with four tactics: work strikes, sit-ins, boycotts and hunger strikes.

"We don't expect prison officials to hear them. We expect lawmakers, people in a responsible place where we can give hope to these demands," he said, urging people to "drop down" and hold demonstrations outside prisons on August 21. "Although we are planning peaceful demonstrations, we understand that at any moment our demonstrations could become more tragic," he said.