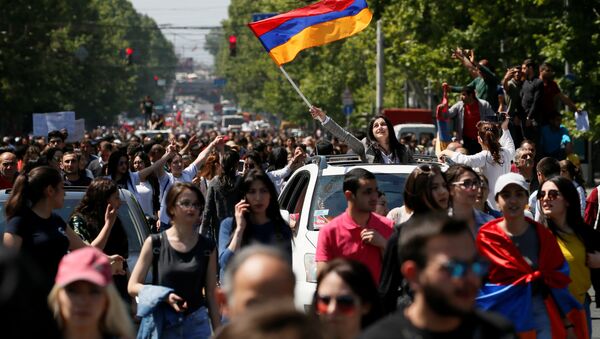 © REUTERS / Gleb Garanich
Subscribe
YEREVAN (Sputnik) - The protest actions in Armenia spread across the whole center of country's capital Yerevan and are also taking place in the country's second largest city of Gyumri and several other settlements, a Sputnik correspondent reported from the scene.

Armenian police said amid the ongoing protests that they do not take sides and do not meddle in political affairs.

Earlier in the day, the rally participants blocked all the streets leading through the Republic Square. The police took control of all the government buildings in her area.

The leader of the protest action in Yerevan, opposition parliamentarian Nikol Pashinyan went from the Republic Square to the office of the ruling Republican Party of Armenia accompanied by a group of protesters. The police dragged additional forces, including armored personnel carriers, to the party's office.

Pashinyan intended to demand from acting Prime Minister Karen Karapetyan to return to negotiations on the terms of opposition, which included the appointment of an interim government headed by a "people's candidate," not from among the members of the Republican Party, and early parliamentary elections.

Karapetyan was supposed to hold talks with Pashinyan on Wednesday, but on Tuesday, the acting prime minister said the meeting had been canceled over new demands for the format of negotiations unilaterally made by the opposition figure.

Earlier in the day, the Prosperous Armenia party, headed by businessman Gagik Tsarukyan, joined the protest actions in Yerevan. The party's Block Tsarukyan faction is the second-largest one in the country's parliament. The Democratic Party of Armenia (DPA), headed by former First Secretary of the Central Committee of the Communist Party of the Republic Aram Sarkisian, joined protests as well.

Sargsyan served two five-year consecutive terms as president until April 9. His election as prime minister on April 17 was largely regarded as an attempt to get around presidential term limits, since the 2015 constitutional amendments transferred governing powers from the president to the head of the government, and provoked mass protests.