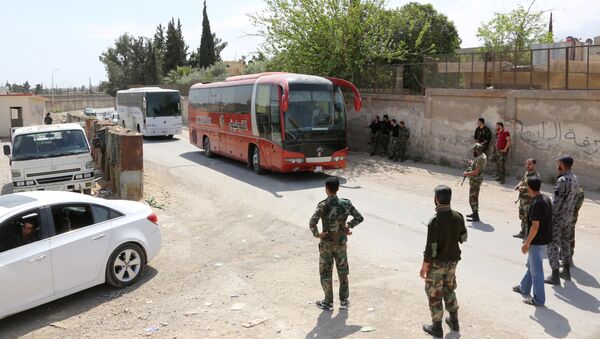 © AFP 2023 / STRINGER
Subscribe
International
India
Africa
The insurgents from Jaysh al-Islam have left Eastern Ghouta and moved to the northern regions of Syria bordering Turkey. A Syrian political source has told Sputnik what they might do there.

A Syrian political source has told Sputnik that “the members of this organization have found themselves in a very tight situation as compared to the other groups fighting in Syria. It is known that they are Saudi Arabia’s instrument of pressure in Syria and have done a lot for their patrons a while ago when they were in control of the capital’s suburbs. It is also known that they had conflicts with Faylaq al-Rahman and Jabhat al-Nusra both of which are tied to Turkey and Qatar.”

“Insurgents from Jaysh al-Islam had been moved to the region of Jarabulus in northern Syria near the Turkish border. This part of the country is now under Ankara’s control, the troops deployed there are conducting the Operation Euphrates Shield and greet the incoming insurgents with hostility because they trust neither them nor their Saudi patrons,” the source from Syria said.

Militants Hand Over Munition Depots, Armored Vehicles to Syrian Army
Insurgents arriving in northern Syria are trying to occupy their own niche. Some of them have agreed to cooperate with the Turkish military and go off to fight against Kurds. “They are looking for new patrons in order to feed themselves and not to vanish as a fighting unit. However, it’s safe to say that they will not be able to fight as before because the Turkish and pro-Turkish forces do not trust them.  Moreover, they have left Eastern Ghouta without heavy weapons, which why there is no more talk about any new armed deeds. Perhaps, they will join some other fighting units, but Jaysh al-Islam will cease to exist,” the Syrian source said.

At the Security Council meeting, the Permanent Representative of Syria to the UN Bashar Jaafari said that Saudi Arabia will redeploy these insurgents for military operations against Yemen.

Lavrov: Militants Who Attacked UN Mission in Douma Were Warned in Advance
Sputnik’s Syrian source, who wished to remain anonymous, said that this would most likely happen. “This is a rather expected course of events, because Saudi Arabia is a major sponsor of Jaysh al-Islam. The Arab Coalition headed by the Kingdom of Saudi Arabia needs fresh forces in Yemen to turn the tide in their favor. There is a delicate issue in this situation – the most convenient way for moving the terrorists to Yemen lies through Turkish territory. In this case, either Ankara agrees to cooperate or Saudi Arabia builds and coordinates a new route,” the Syrian political source said.
Newsfeed
0
Access to the chat has been blocked for violating the rules . You will be able to participate again through:∞. If you do not agree with the blocking, please use the feedback form
The discussion is closed. You can participate in the discussion within 24 hours after the publication of the article.
To participate in the discussion
log in or register
loader
Chats
Заголовок открываемого материала