'They Are All Heroes': Quick-Thinking Passengers React During Southwest Accident 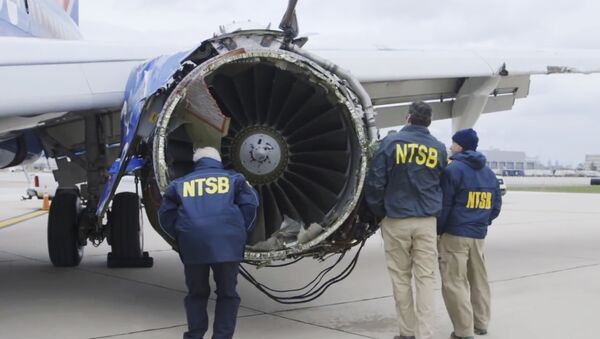 © AP Photo / NTSB
Subscribe
A retired nurse, a ranch hand and firefighter tried desperately to save the life of a woman who was partially sucked head-first out of the window of a Southwest Airlines flight on Tuesday.

Retired nurse Peggy Phillips was sitting in front of Jennifer Riordan on WN Flight 1380 from New York to Dallas on Tuesday when the plane’s left engine suddenly blew up sending shards of metal flying through the window that Jennifer Riordan, a bank executive from New Mexico, was sitting next to.

The next moment Riordan was sucked halfway into the shattered widow. Phillips, firefighter Andrew Needum and Tim McGinty, a ranch hand who was sitting across the aisle, several rows ahead of Riordan, rushed to her rescue pulling the woman back into her seat, The Guardian reported.

“There were a lot of really heroic and thoughtful things that went on during the flight. I was very proud of everyone involved,” Peggy Phillips said.

The captain, Tammie Jo Shults, a former fighter jet pilot in the US navy, displayed “nerves of steel” as she managed to land the crippled jet in Philadelphia.

“They are all heroes. God bless them all and we thank God for His care in landing our plane. Southwest did a great job in what was a horrific accident,” McGinty’s wife Kristin was quoted by Mail Online recalling the hair-raising accident.

Jennifer Riordan was rushed to the hospital but later died of her injuries.

Another passenger reportedly had a heart attack, and a third struck by shrapnel.

The Boeing 737 with 143 passengers and five crew members on board had just departed New York's LaGuardia Airport en route to Dallas when the left engine exploded and ruptured metal flew towards a window causing the aircraft to depressurize.

Shults immediately diverted the plane to make an emergency landing in Philadelphia. After landing, she walked  down the cabin thanking the passengers, asking them if they were all right.

Photos and video captured by passengers from inside the cabin and posted on social networks showed significant damage caused to the plane, a part of the covering from its left engine entirely ripped off and a shattered window.

READ MORE: Plane Crashes Into a Car in Outrageous Accident in Russia

National Transportation Safety Board Chairman Robert Sumwalt said on Tuesday that the engine that broke down will be thoroughly examined.

The US Federal Aviation Administration (FAA) said Wednesday it would order inspections of certain jet engines after this week's incident.

"The FAA will issue an Airworthiness Directive (AD) within the next two weeks that will require inspections of certain CFM56-7B engines," the air safety regulator tweeted.

According to the US Aviation Safety Network, no people had perished as a result of commercial jet crashes on US soil in 2017. This is the fourth year in a row without such fatalities.