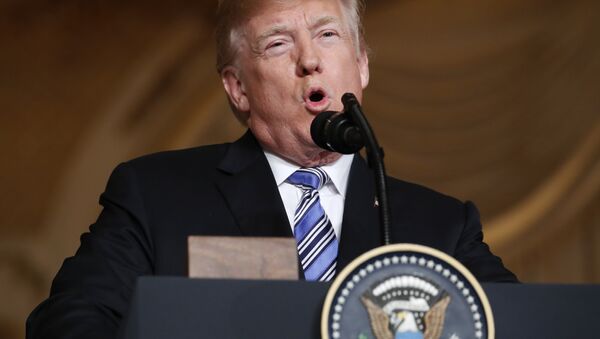 The revelation that the two leaders had agreed to meet made for explosive news when it was announced last month, as it would be the first meeting of a sitting US president and a sitting North Korean leader since the end of active hostilities in the Korean War.

Trump remarked that CIA Director Mike Pompeo, who is now his secretary of state nominee, recently met with Kim and "worked hard" on the issue of returning the three American citizens detained in North Korea.

"If the meeting — when I'm there — is not fruitful, I will respectfully leave the meeting, and we'll continue what we're doing," he added.

"There is a bright path available to North Korea when it achieves denuclearization in a complete and verifiable and irreversible way," Trump stated, adding that the "maximum pressure" campaign will continue "until North Korea denuclearizes."

​The historic US-North Korea summit is expected to take place in the coming weeks. It is expected that the leaders will discuss denuclearization of the Korean Peninsula.

​During the news conference, Abe said that Japan and the US agreed to start new trade talks to cut the US' annual trade deficit with Tokyo. The prime minister said he had had "extremely fruitful talks in a relaxing atmosphere" over two days with Trump.

000000
Popular comments
yet another highly immature statement.
michael
19 April 2018, 01:47 GMT3
000000
"Trump: I Won't Meet Kim Jong Un Unless Summit Promises Success" As predicted, the Dumb-in-chief is already retracting! One day he says that the US military illegally in Syria would "soon, very soon, come home". A few days after that, he orders the bombing of Syria! Not one word coming from this guy can be taken seriously, not even one!