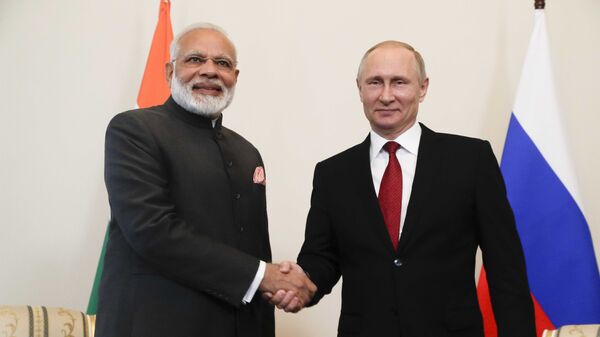 The commemoration of the 70th anniversary of Indian-Russian diplomatic relations came to a colorful conclusion in New Delhi on Friday with a gala featuring music, dancing and a fashion show in the presence of dignitaries and representatives from both countries.

New Delhi (Sputnik) — The concluding ceremony of the India leg of the joint commemoration of 70 years of Indian-Russian relations was organized at the Pravasi Bharatiya Kendra (Indian Diaspora Center) in New Delhi. The occasion saw the Indian minister of state for external affairs, MJ Akbar, and movie star Hema Malini, along with other Indian dignitaries attending the festivities.

Nikolay Rishatovich Kudashev, the ambassador extraordinary and plenipotentiary of the Russian Federation to the Republic of India, led the Russian side. The ambassador read out a message by the Russian Foreign Minister Sergey Viktorovich Lavrov to the august audience.

It's a celebration of "an everlasting friendship" tweeted the official twitter handle of the Ministry of External Affairs of India to mark the occasion.

Celebration of everlasting friendship! Gala closing ceremony of year-long celebrations of 70 years of establishment of India-Russia diplomatic relationship in Delhi. Minister of State for External Affairs @mjakbar and Member of Parliament @dreamgirlhema joined in the festivities pic.twitter.com/P8JDOLT3cb

In these 70 years, people have identified and interacted with each other through a unique language of trust, emotions, respect and mutual learning. Understanding the two cultures with music and art at the forefront has been fundamental, the Indian minister added.

"Commerce and culture have been the bedrock of our relationship and we look forward to further strengthen it with newer frontiers of sea and space cooperation. Deep sea hydrocarbon exploration is one area we are looking ahead for enhanced engagement. These engagements shall set the foundation for a better world. New horizons shall emerge in the times to come in the Indo-Russian relations," he said.

World
Putin, Modi and Xi More Popular Than Trump in Global Poll
Nikolay Rishatovich Kudashev said that the two countries should "alleviate the friendship to newer heights," while reading a message by the Russian Foreign Minister Sergey Viktorovich  Lavrov.

In his personal message to the gathering, Ambassador Kudashev said that the Indo-Russian relationship "is immune to any external factors and it continues from strength to strength."

Hema Malini, an Indian film actor and member of parliament, who heads the Indo-Russian Parliamentary Friendship Group, called upon the need for greater engagement of parliamentary delegations and mutual learning between lawmakers.

Hema Malini, who is known as "Sita — Gita" in Russia for her role in an Indian film by the same name, said she loved the way Russian girls were learning Indian classical dances in Russia. She also announced the co-production of an Indo-Russian film on the occasion. Hema Malini was the lead actress in the recent Indo-Russian co- production "Alibaba and the Forty Thieves."

The evening was marked by cultural programs of Indo-Russian fusion with dance and music leading the way. A fashion show was also presented on the occasion. The famous Indian Shillong Chamber Choir performed Hindi, English and Russian tunes to make the occasion a memorable one.