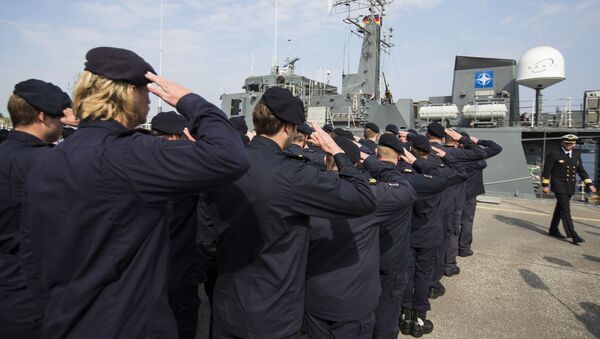 © AP Photo / Gero Breloer
Subscribe
The Trident Juncture NATO drill, of the highest caliber ever held in Norway, is expected to leave a mark on the nation's everyday life. In the course of four months, over a hundred Norwegian municipalities will experience a marked increase in traffic and noise, spurring the authorities into taking unparalleled preparatory action.

In total, the drill will feature 35,000 NATO soldiers from numerous member states gathering in Norway, ranking among some of the most extensive exercises held in the Scandinavian country in years, affecting tens of thousands of ordinary Norwegians, national broadcaster NRK reported.

While the Trident Juncture drill itself, whose stated goal is to bolster cooperation within NATO and with so far still non-aligned partner states, is expected to take place from October 25 to November 7, a large-scale presence of NATO forces will be felt in large swaths of Norway for a period of several months.

In total, over a hundred municipalities across the country will be affected by increased traffic and noise in connection with the extended traffic exercise. The Trøndelag, Møre og Romsdal, Oppland and Hedmark counties will be most affected, but the military will be visibly active in much of the country for a period spanning from August to December.

READ MORE: NATO Puts the Lid on 'Enemy Incident' With Erdogan During War Games in Norway

According to Lieutenant Colonel Ivar Moen, chief information officer at the Norwegian Armed Forces Headquarters, the drill will stretch over a vast territory stretching over 1,000 kilometers from north to south.

"There will be aircraft activity from Bodø [in the north] to Fredrikstad [in the south], Moen said, adding that the northernmost counties of Troms and Finnmark will remain the only ones not affected by the drill.

The Norwegian Directorate for Civil Protection (DSB) warned that traffic problems due to extensive movement of personnel and material through the country are likely to occur, urging fellow Norwegians to "take one for the team."

"The drill will show our ability to welcome NATO. And neither our own defense nor NATO itself can cope without civil society support. So we talk about close interaction between public Norway, private Norway and volunteer Norway. This would also say something about our common ability to cope with serious crimes should something serious happen," DSB deputy director Per-Kristen Brekke told NRK.

Lieutenant Colonel Moen pledged that the Norwegian public would be given relevant information on the exercises both in advance and on an ongoing basis via radio broadcasts and military websites. Additionally civilian authorities such as the police and traffic agencies will be forwarding information from the military sources to the population.

"The reason we are giving such early notice is to prepare and motivate the public to welcome our allies. There will be many things to consider for us, so we want to be as well prepared as possible. Then we'll be able to concentrate on the exercise," Moen explained.

The most visible part of Exercise #TridentJuncture 2018 is still some eight months away, but personnel from across @NATO already have it on their mind.

Norway will become the primary host of the Trident Juncture drill, with smaller offshoot exercises held in Finland, Sweden (both currently non-aligned) and not least Iceland. NATO carries out a major exercise of this kind every three years, with the most recent having taken place in Portugal, Spain and Italy in 2015.

000000
Popular comments
lol they'll all get lost in Finland... too much asthma medicine.