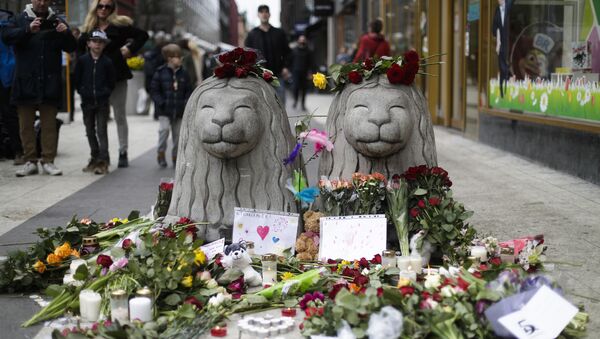 Despite research indicating that the Muslim Brotherhood is working to polarize and increase segregation in Swedish society, an imam with close ties to the controversial Islamist organization banned in many countries, was invited to the memorial service over the victims of the deadly Stockholm truck attack.

An imam from the Stockholm Mosque, known for his association with the radical Islamist organization Muslim Brotherhood* was invited to the service held in memory of the victims of the truck attack that happened in central Stockholm on April 7, 2017, killing five and crippling 15.

The memorial service was held in the Adolf Fredrik Church in Stockholm and included Archbishop Antje Jackelén and Bishop of Stockholm Eva Brunne, the royal couple, several ministers, various party leaders, as well as relatives of the victims murdered by Uzbek terrorist Rakhmat Akilov, guarded by the police and civil protection personnel. Representatives of Judaism and Islam, the other two Abrahamic religions, were also invited to say a few words.

Islam was represented by Mahmoud Khalfi, Imam at the Stockholm Mosque, a choice many argued was controversial due to his associations with the Muslim Brotherhood, the news outlet Nyheter Idag reported.

Mahmoud Khalfi is known for having previously praised Islam's entry into Swedish politics. Sameh Egyptson, a researcher in religious studies at Lund University, pointed out that Khalfi had praised, among other things, the political career of former Housing Minister Mehmet Kaplan as a "breakthrough for Islamic forces in Swedish politics" in an interview with Arab media. Turkish-born Mehmet Kaplan resigned in 2016, following a controversy regarding Islamic extremism after he was found dining with Turkish nationalists with a record of inciting racial hatred and urging Turks to kill Armenians.

Khalfi himself has made no secret of his associations with the Muslim Brotherhood.

"Yes, it's no secret that we have links to the Brotherhood, we choose it as a direction. But we are not receiving orders from Morocco or Egypt on what we have to do, we are an independent organization here in Sweden," Khalfi said, as quoted by Nyheter Idag.

Researcher Magnus Norell, a senior fellow at the European Foundation for Democracy, described the Muslim Brotherhood as a precursor (or "daddy", to use his exact phrase) to most organizations and networks that dominate political Islam in the West, including Sweden.

"By effectively rising to positions as representatives of Muslim communities, it outplayed other Islamic vying to represent Muslims in relation to political and economic power," Norell wrote in his opinion piece published by the Ledarsidorna portal.

A recent report by social anthropologist Aje Carlbom from Malmö University, compiled on behalf of the Swedish Contingencies Agency (MSB), stressed that organizations associated with the Muslim Brotherhood strive to "protect" Muslims by isolating them from the majority population via their own schools, public institutions and parallel societies.

"These groups work to strengthen the segregation problem," Carlbom told the Expressen daily, calling this "problematic." "Even if MB-associated organizations are not violent actors per se, they have a strong political stance that can marinate in people anextreme ideology and polarize society," he added, stressing how easy it is for organizations to influence the Swedish public for fear of being stamped as racist or Islamophobic.

Founded in 1928 in Egypt, the Muslim Brotherhood has fledged into a pan-Islamic organization claiming over a million worldwide members in 70 countries. It is regarded as a terrorist organization in many countries, including Russia, Egypt, Saudi Arabia and the United Arab Emirates. In Sweden, the MB has been active since the late 1970s.

While the exact number of Muslims in Sweden is up for debate due to the fact that religious profiling is not allowed in the Scandinavian country, a 2017 Pew Research report documented the Muslim population at 8.1 percent of the total population of Sweden of 10 million (approximately 810,000).